To Inspire the Highest Type of Womanhood

Organizations that fail to continually evaluate their purpose and function do just that — they fail. Gamma Phi Beta’s first mission statement was developed in the mid-1990s and served the Sorority in good stead for many years. But like everything else, mission statements evolve, and it was now time for a more succinct and focused version.

The goal was to preserve the history of the organization while ensuring its relevance to today’s members and chapters, acknowledging their individuality as well as their common concerns and interests. International President Linda Lyons Malony (Southern California) wrote, “After wrestling for nearly a year with various concepts at every meeting, on virtually every conference call and in a zillion emails, International Council voted on the final wording for Gamma Phi Beta’s new mission statement at our June meeting.” The newly adopted mission statement was, “To inspire the highest type of womanhood.” Shorter and easier to remember, the new statement included the phrase “highest type of womanhood,” echoing the desires of Gamma Phi Beta’s Founders. Membership Vice President Jeannette “J. J.” Kaelin (Colorado-Boulder) said, “We simply went back to our roots and the intention of our four Founders. We kept coming back to inspiring women to be greater than they knew they could be.” 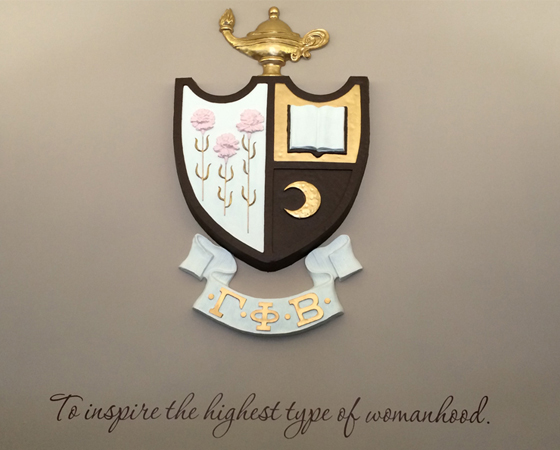 Decor found above the front desk at International Headquarters.