Leigh Ann began volunteering for Gamma Phi Beta in 1992, as the treasurer of the Alpha Xi Chapter (Southern Methodist) Affiliated House Corporation (AHC). She later served as an international volunteer in the roles of province financial director and director of housing before being elected to International Council (IC) to serve as the Sorority’s Financial Vice President from 2010-14. She also served on the IC Structure and Function Task Force from 2013-15). She is an inaugural member of the Gamma Phi Beta Facilities Management Company Board of Managers and now serves as Chairwoman for the 2016-20 term.

At the NCAA, Leigh Ann is charged with implementing and enabling the process of business performance management to drive:

The business performance management office is responsible for financial planning and analysis; data warehousing, business intelligence and analytics and Six Sigma-based continuous improvement training and practice. The hallmark of Leigh Ann’s work is a hands-on, multi-dimensional, panoramic-vision approach to creating business solutions that balance strategy and theory with tactical efforts required to implement those solutions.

Away from the office and volunteer work, Leigh Ann pursues her passions for tennis, the outdoors and animal welfare. With 35 years of professional experience, Leigh Ann believes there are, in fact, four I’s in TEAM: Intelligence, Integrity, Inspiration and Intensity!

Since 2015, Crissy Buchanan Carlisle has served as the chief investor relations officer at Birmingham-based Encompass Health, a national leader in integrated healthcare services. She joined Encompass Health in February 2005, as the director of Securities and Exchange Commission (SEC) reporting and was quickly promoted to vice president of financial reporting in August 2005. Crissy earned her bachelor’s degree in accounting from the University of Alabama and master of business administration from Duke University. She specializes in financial reporting, process improvements and professional development.

Prior to joining Encompass Health, she served as a director within the Corporate Recovery division of PricewaterhouseCoopers LLP and as a manager within their audit practice. Her career achievements have been recognized by being named the Best Investor Relations Professional in MidCap Healthcare Facilities and Managed Care by Institutional Investors.

On top of balancing a successful career in a male-dominated field, Crissy holds another important role as a wife and mom. Her philanthropic involvement includes her work on the Accounting Advisory Boards of Samford University and the University of Alabama at Birmingham (UAB), United Way of Central Alabama and her role as a mentor for female business students at the University of Alabama and UAB. In addition, Crissy is actively involved with the athletic boosters programs at Spain Park High School and serves as a faith trainer for the children’s program at The Church at Brook Hills.

Crissy was initiated at the Epsilon Lambda Chapter (Alabama-Tuscaloosa) and continued her dedication to the Sorority through various volunteer roles including new chapter recruitment advisor, province membership director and serving as president on the Epsilon Lambda Affiliated House Corporation (AHC). Gamma Phi Beta allows Crissy to live out her personal mission statement – walk by faith, give with a generous heart and make a difference in the lives of others.

Crissy lives in Birmingham, Alabama, with her husband Mark and son Nicholas, where she spends time giving back to her community, exercising and traveling the world. 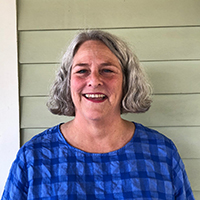 Barbie Chadwick is currently serving her first term on the FMC Board of Managers. Barbie is a member of Alpha Theta Chapter (Vanderbilt) and has a Bachelor of Arts in English. She has worked in the nonprofit field for 30 years before retiring from the Boys and Girls Clubs of Middle Tennessee in 2019.

Barbie’s career in nonprofit management began in public television as the membership coordinator for her local public television station. After producing on-air pledge drives and managing the membership program for more than seven years, Barbie moved on to work with numerous other nonprofit organizations, including serving as executive director of the Alpha Omicron Pi Foundation. In this role, Barbie was able to marry her passion for building young women into the leaders of tomorrow through leadership development with her passion for fundraising.

In her retirement, Barbie continues to serve her community as a fundraising consultant. In fact, she volunteers her time as a consultant to the local Girls on the Run chapter to help them enhance their fundraising efforts beyond their annual events.

Barbie has been actively involved in Gamma Phi Beta at both the local and international levels since her graduation. Her first introduction to International Gamma Phi Beta was at Convention 1978, held in Nashville – as a new graduate she served on the Local Committee as the properties chair.

She began her service locally on the Affiliated House Corporation (AHC) in 1978, serving as both president and treasurer during her tenure. She was also an advisor for Alpha Theta Chapter, president of the Nashville Alumnae Chapter and Panhellenic representative to the Nashville Area Alumnae Panhellenic Council.

On the international level, Barbie served as a province collegiate director, new chapter director, director of collegiate chapter development, Collegiate Vice President and as the International Council (IC) representative on the Gamma Phi Beta Foundation Board of Trustees. After her service on IC, Barbie was on the International Awards Committee and the Nominating Committee. In addition to her role on the FMC Board of Managers, Barbie serves as the treasurer of the National Panhellenic Conference (NPC) Foundation.

Barbie lives in Nashville, Tennessee, and spends much of her retired time gardening, reading, playing bridge and mah jongg and planning her next overseas trip. 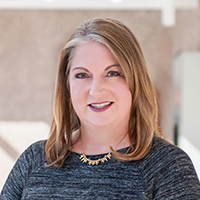 Jennifer Moody Ogden is serving her second three-year term on the FMC Board of Managers. Jennifer was initiated at Delta Epsilon Chapter (Texas Wesleyan) and graduated from Texas Tech University with bachelor of arts in political science and the University of North Texas with master of science in accounting.

Jennifer leads the provider workforce planning practice at ECG Management Consultants, a global partner of Siemens Healthineers, where her work focuses on healthcare strategy and community health resource development. Prior to joining ECG in 2015, Jennifer spent 20 years in healthcare consulting and physician recruitment. She also co-founded, led and sold an international design and manufacturing business in the craft industry.

Jennifer is an avid volunteer and just completed a two-year term as chair of the Board of Managers for Texas YMCA Youth and Government, a program focusing on experiential democracy for teens. She also helped found and co-led the Texas YMCA Model UN program for its first four years. The two programs together host over 2,500 students at their top-level conferences annually. Jennifer has been awarded with the highest annual volunteer award with Texas YMCA Youth and Government and the highest annual Texas Model UN volunteer award was named in her honor. She has also served on boards for the Texas Girls Choir, Fort Worth YMCA and Texas Tech Alumni Association.

Jennifer resides in Fort Worth, Texas, in a 1924 Craftsman bungalow that she spent three years lovingly restoring with her husband Jim. She enjoys spending time with her two Great Pyrenees, traveling, cooking, baking and needlepoint. 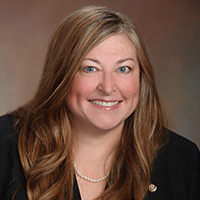 Ruthe Wynne was initiated in the fall of 1985, at Gamma Eta Chapter (California State-Long Beach). She has served in various Gamma Phi Beta volunteer roles including recruitment advisor, alumnae Panhellenic representative, alumnae chapter president, regional coordinator, specialist recruitment consultant and most recently serves on the FMC Board of Managers.

Ruthe Wynne is general counsel for Jensen Precast, one of the largest independently owned precast concrete companies in the United States. They design and manufacture precast concrete products for large-scale infrastructure of highway construction, retaining walls, electric and gas utility, telecommunications, water, on-site wastewater and sewage applications. She is responsible for all legal issues, including advising c-suite executives and the board of directors.

Prior to Jensen Precast she was general counsel for a major door and window manufacture and supplier. Before going in house, Ruthe was the supervising attorney at Kring and Chung’s Sacramento office. Her practice focused on construction litigation, indemnification, insurance coverage, commercial and government contracts.

Ms. Wynne holds a B.A. from California State University, Sacramento and a J.D. from University of Pacific, McGeorge School of Law. She is currently a L.L.M. business transactions candidate at the University of Alabama.

During her free time, she enjoys entertaining, traveling and spending time with her husband, son and her two Gamma Phi Beta daughters.

Ruthe shares, “I am most excited to be part of the time of uniting the Foundation, FMC and Sorority into one united cohesive organization for the upcoming 2020-22 biennium. Especially as we prepare to for our 150th anniversary. Let’s grow Gamma Phi!” 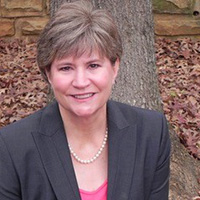 Shery is a native Texan who grew up in Midland, obtained her BBA in marketing from Texas Tech University and her MBA with a concentration in finance from University of Texas at Arlington (UTA). She was initiated into Beta Tau Chapter (Texas Tech) and served as the standards chairwoman.

Upon graduating from UTA, Shery began her banking career with NorthPark National Bank and continued with Comerica Bank after NorthPark was acquired. She has more than 35 years of banking experience in North Texas and with Comerica. Shery is a line lender and alternate group manager for the North Texas office of Commercial Real Estate for Comerica in Dallas, Texas. Prior to joining the real estate group in 1991, she was a middle market lender.

She is actively involved in her community serving as the United Way Market Chair and leadership chair for Comerica Bank, Texas and more than eight years as a member of the Financial Education Grant Panel for the United Way of Metropolitan Dallas. She has served in multiple positions with The Real Estate Council (TREC) and its foundation. She just rolled off her position on the Environmental Conservation Commission for the Town of Flower Mound. She currently serves on the Finance Committee for Flower Mound United Methodist Church.

Shery’s hobbies include art, reading, jewelry making, greyhound rescue and traveling. She is also sailing certified and enjoys the occasional game of golf and tennis. She actively participates in circuit training and avidly practices yoga. Shery is a widow and has two grown children, a son Garrett who works in meteorology, is a Delta Upsilon alum from University of Oklahoma and holds a master’s in geographic information systems from University of Alabama, Huntsville, and a daughter Erin who’s a volleyball student athlete that studied nursing and is a Gamma Phi Beta alumna from University of Delaware.

Shery was interested in serving on the FMC Board or Managers in order to share her knowledge of construction and real estate management, help grow the Sorority and give back to the organization that provided her with many life-long friendships. She attended the Convention 2018, in Dallas, Texas. She hopes to help guide the organization as it grows and navigates the changing political landscape regarding sororities on college campuses.

Stephanie Gauchat Carriere is currently serving in her first term as a Vice President on Gamma Phi Beta’s International Council (IC). Stephanie also serves on the Sorority’s Finance Committee and is the IC liaison to the Gamma Phi Beta Facilities Management Company Board of Managers. A member of Alpha Epsilon Chapter at the University of Arizona, Stephanie has a B.S. degree in special education and rehabilitation and M.A. in special education and rehabilitation with an emphasis in emotional and behavioral disorders.

In her local community, Stephanie is active with Girl Scouts Arizona Cactus Pine Council, serving as Girl Scout leader, a member of the council’s Cookie Advisory Board and the cookie program manager for the Gilbert Service Unit. She is also a classroom coordinator and school volunteer. 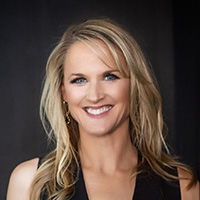 Megan holds a B.S. from Washington State and a master’s degree in education policy, research and administration from the University of Massachusetts. Originally from Beaverton, Oregon, Megan and her husband Doug live in Greenwood Village, Colorado, with their three children Noelle, Colin and Stella, two cats and one goldfish. Go Cougs!