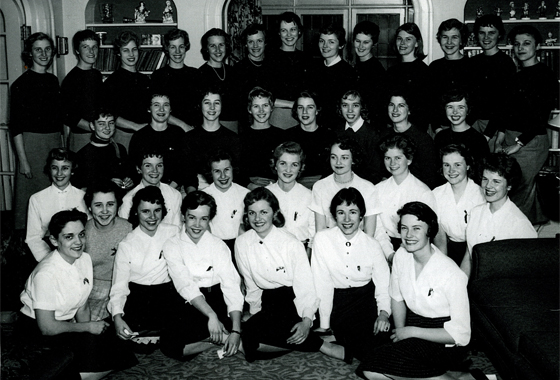 During the 1950s, Americans enjoyed a period of post-war peace and prosperity that sent young adults flocking to the suburbs and witnessed women enrolling in universities in unprecedented numbers. The first color television program was broadcast in 1951 and in the first five years of the decade, the number of American homes with television sets increased from three million to 32 million. “I Love Lucy,” “Father Knows Best,” and “Leave It to Beaver” became entertainment staples across the country. Elvis Presley took the world by storm and redefined the popular look for the male American teenager with longer hair and rolled cuffs, while poodle skirts, ponytails, shorter shorts and stilettos were must-haves for girls.

Despite the idyllic image of the suburban early-fifties, the country was not without its conflicts. As tension rose between capitalism and communism, McCarthyism took hold of many Americans as they suspected their friends and neighbors of espionage. In 1955, Rosa Parks made her famous stand against racial inequality by refusing to give up her seat on a Montgomery, Alabama, bus. A new group of free-spirited young adults calling themselves the Beatniks gave popularity to new artists and authors, fashion choices and ideas. Their exhaustion from conformity would be carried through to the next decade, giving rise to the counter-culture movement.