The 42nd Convention assembled June 22-27, 1946, at the Mount Washington Hotel in Bretton Woods, New Hampshire, where the main topic of business was the post-war revival of expansion efforts.

Gamma Phi Beta was due to celebrate its 75th anniversary in 1949, but instead of waiting, the Sorority celebrated its Diamond Jubilee Convention in advance of the anniversary, at the 43rd Convention held at the Jefferson Hotel in St. Louis, Missouri, from June 29 to July 2, 1948.

At Convention 1948, Harriet Ross Wilcutt (Boston, 1901), serving as standards chairwoman, delivered an address entitled “Our Creed,” distributing copies of the new Creed to everyone in attendance. It was adopted and Gamma Phi Beta’s Core Values of Love, Labor, Learning and Loyalty were derived from its lines.

Grand President Penelope M. Simonson (California-Berkeley, 1909) presented a bronze plaque to Syracuse University’s Vice Chancellor Finla Crawford in November 1949, in memory of Gamma Phi Beta’s four Founders to commemorate the 75th Anniversary of its founding. The dedication ceremony was held in Hendricks Chapel on the university campus and was attended by the Sorority’s officers, members of Alpha Chapter (Syracuse), and many distinguished Syracuse alumnae. The plaque was to be placed in the Women’s Building, then under construction. The plaque is still affixed to the Women’s Building, next to the second-floor entrance. 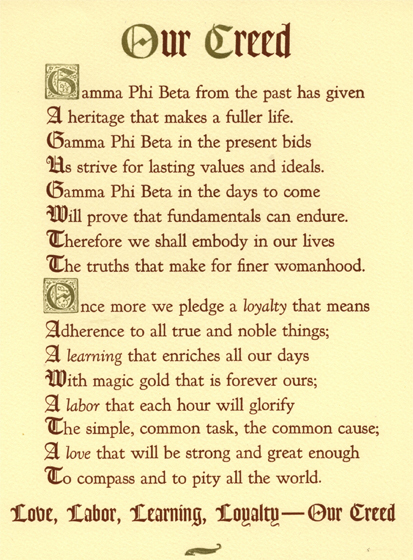 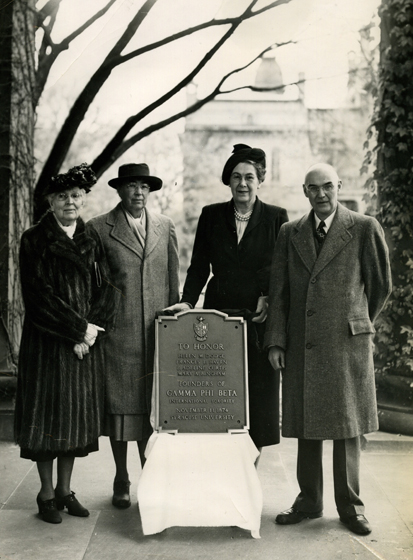 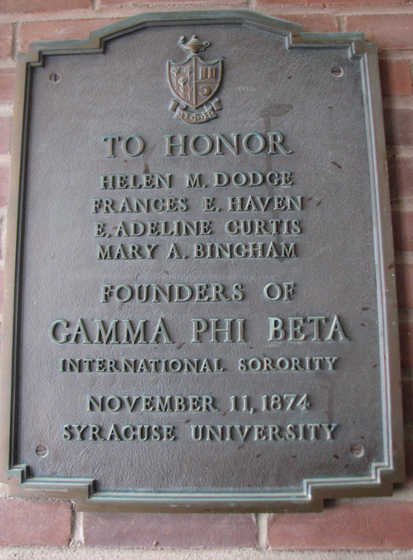