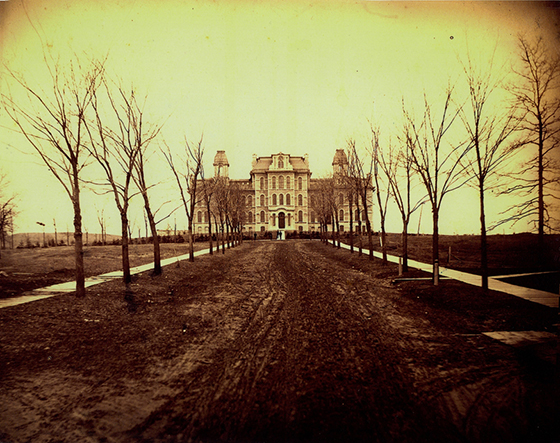 Syracuse University was founded as a co-educational institution in 1870. Centrally located in the Onondaga Valley, an area rich in Native American history, Syracuse, New York, had become a large and thriving city with a population of approximately 60,000 by the mid 1800s. When the Methodist State Convention met there in February 1870, they passed a resolution to found a university in Syracuse. Reverend Jesse Peck, an American bishop of the Methodist Episcopal Church and president of the newly-formed Syracuse University Board of Trustees announced that, “The conditions of admission shall be equal to all persons…there shall be no invidious discrimination here against woman…brains and heart shall have a fair chance…” From a modern viewpoint, we can’t help but be struck by the possibility that Reverend Peck was attributing brains to men and hearts to women.

A total of $500,000 was raised through various sources and at Reverend Peck’s urging, 50 acres of farmland on the southeast end of Syracuse were purchased as a site. The University’s charter and certificate of incorporation were signed on March 24, 1870. The cornerstone for the Hall of Languages was laid in August of 1871 but unwilling to wait until its completion, the University rented the upper floors of the Myers Block in downtown Syracuse as a temporary campus for the University’s College of Liberal Arts. Forty-one students, seven women among them, were admitted. By May of 1873, the Hall of Languages, the first building on the new university’s campus, was dedicated and in use.