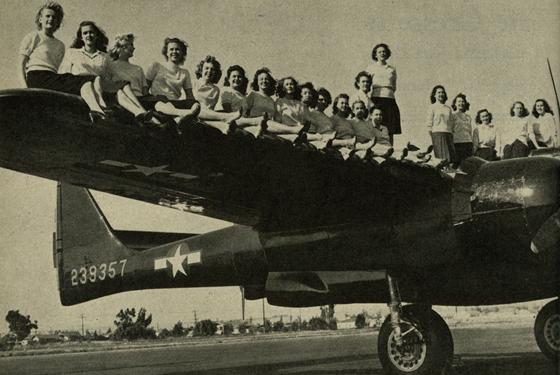 Members of Beta Alpha Chapter (Southern California) posing on top of “Gamma Girl,” one of two planes funded by the chapter after just five days of selling war bonds.

Individual chapters did their part for the war just as they had during the First World War, but in 1944, Gamma Phi Beta launched a campaign the results of which were nothing less than spectacular.

Mrs. Dorothy Devin (Kansas, 1916) became honorary chairman of the “Bonds Buy Mercy” campaign for the purpose of raising funds for the care and rehabilitation of wounded soldiers. Charlotte White (Washington University, 1917), acting chairman of the campaign working through the Central Office, had a vision for how the funds they raised would be used: “It will be possible to care for a wounded person with equipment supplied through our efforts from the time he is wounded until he is ready once more to become a useful citizen. Our Hospital Service plane flies him to our General Hospital where he is cared for with our equipment; then one of our planes flies him to one of our Convalescent Hospitals where he recuperates, then he is rehabilitated with funds we have made possible and is discharged to return to civilian life.”

The first campaign was held from April 25 to June 5, 1944, and raised a total of $1,041,167. Of that, $750,000 was used to purchase six hospital service planes, each of which had a sponsorship statement that read, “This marker is placed here in recognition of the purchase of war bonds in an amount equal to the price of equipment of this type by Gamma Phi Beta. Type of Equipment: Hospital plane.” In addition, $232,000 was spent on equipment for a 1,500-bed general hospital; $30,000 purchased 1,000 hospital beds; $25,000 was used for blood transfusion apparatus; and $4,167 for medicines. For this work alone, the first of four fund drives, Gamma Phi Beta received a special citation from Treasury Secretary Henry Morgenthau. 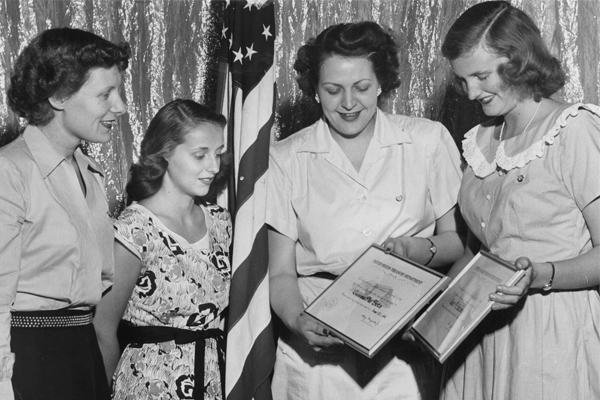 WWII identification carried on the dashboard of each of the six hospital planes purchased by Gamma Phi Beta through the sale of war bonds.

The second “Bonds Buy Mercy” drive ran from October 15, 1944, to January 15, 1945, and realized four times their goal, raising a total of $4,256,494, enough to establish five convalescent hospitals and provide rehabilitation for 2,468 patients. The third bond drive ran from May to July of 1945 and raised another $4,850,250. The fourth, a post-war drive they named the “Victory Loan” drive, ran from October 1945 to January 1946 and raised $3,788,767 to cover the cost of rehabilitation for 2,492 wounded soldiers. In 1946, the Sorority again received a citation, this time from Secretary Vinson of the Department of the Treasury. The full total of the four drives carried out by Gamma Phi Beta was just under $15 million, worth more than $195 million today when adjusted for inflation.

Two members of Gamma Phi Beta gave their lives to their nation during World War II. Margaret Sanford Oldenburg (California-Berkeley, 1930) was a member of the Women’s Air Force and died in an airplane crash in Texas while returning from a mission in March 1945. Anne Dingle Woodward (Minnesota-Twin Cities, 1941) was a volunteer with the American Red Cross, and died while on a mission from her home base in Australia in April 1945. 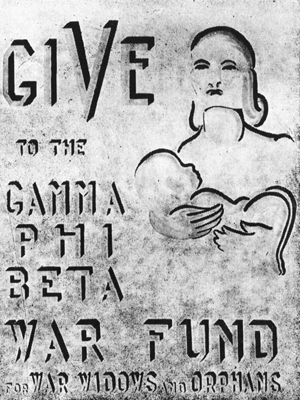 WWII poster – Ten dollars in war stamps was given to Hope Whiting (Delta) for her winning poster in the actives and pledges contest sponsored by the Gamma Phi Beta War Relief Fund Committee.