Between 1929 and 1934, Gamma Phi Beta’s camps were financed through a Camp Fund that consisted of an annual tax of $1 from every active member. In 1934, Epsilon Chapter (Northwestern) and the San Diego Alumnae Chapter each donated $100 to start a Camp Endowment Fund and the annual tax was discontinued.

Gamma Phi Beta’s camps remained the focus of our philanthropic endeavors through the Depression years, but during the war, everything changed. The Virginia Camp, organized in 1935 in Cape Henry near Norfolk, Virginia, continued until 1939, when the Sorority closed it due to its distance from an alumnae chapter with enough members to sustain its operation. When World War II began, Gamma Phi Beta had three camps. The Denver camp, having first moved to Palmer Lake, was now located in Buffalo Park since 1933. The British Columbia Camp, first conceived as an idea of the Vancouver Alumnae Chapter in 1929, was started in 1931 on the shores of Boundary Bay near Vancouver but in the state of Washington. The short-lived New York Camp started in 1937 on the shores of Lake Ontario near Buffalo. 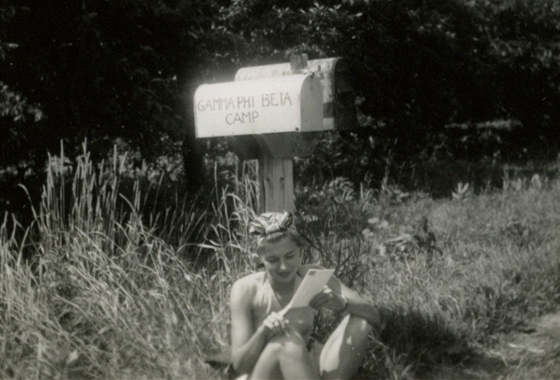 All three existing camps were closed in 1943 for the duration of the war. During their suspension, funds from the sale of the Virginia camp were distributed as camperships to provide needy children an opportunity to attend camps at locations closer to their homes.