One of the more amazing stories of Gamma Phi Beta involvement in World War II is that of Marguerite Higgins Hall (California-Berkeley, 1938), who won a Pulitzer Prize for her brilliant reporting on the European and Pacific war fronts. Born in 1920 in Hong Kong, Marguerite began her journalism career at the University of California-Berkeley. Having completed her graduate work at Columbia University, she went to work for the New York Herald Tribune. She persuaded them to send her to Europe and after stints in both London and Paris she was reassigned to Germany in March 1945. There she witnessed the liberation of prisoners from Dachau concentration camp and went on to cover the Nuremberg war trials. 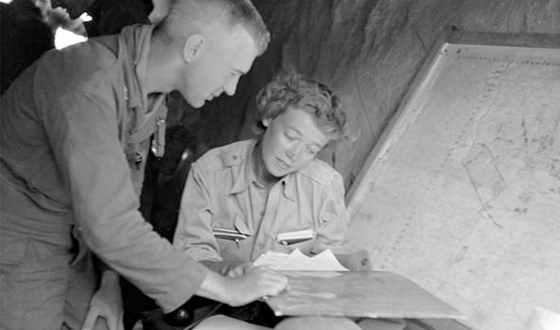 Marguerite continued blazing trails and knocking down barriers for women journalists. During the Korean War, Gen. Walton Walker ordered her out of Korea but she appealed to his superior officer, Gen. Douglas MacArthur, who sent a telegram to the Herald Tribune stating, “Ban on women correspondents in Korea has been lifted. Marguerite Higgins is held in highest professional esteem by everyone.” She was the first woman to win a Pulitzer Prize for International Reporting in 1951, sharing the award with five male war correspondents. She went on to interview many notable individuals and world leaders including Francisco Franco, Nikita Khruschev and Jawaharlal Nehru. While visiting hundreds of villages as she covered the Vietnam War, Marguerite contracted a tropical disease that took her life in 1966 at the age of 45. In 2002, a United States Postage Stamp was issued in her honor as part of the Women in Journalism series and in 2010, Marguerite’s daughter and grandson traveled to South Korea to accept the Heunginjang, a national medal awarded posthumously for her bravery in publicizing South Korea’s struggle for survival in the early 1950s. 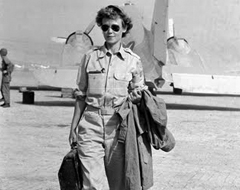 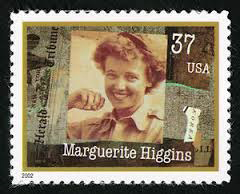