The turmoil that characterized the late 1960s and early 1970s was finally dying down. President Ronald Reagan’s election portended a return to more traditional values and First Lady Nancy Reagan launched her “Just Say No” campaign against drug abuse. Women were playing an increasingly larger role in the workplace and the term “Ms.” was created to ward off speculation or concern over a woman’s marital status. The Hippies’ tie-dyed t-shirts were traded in for the exaggerated shoulder pads, leg warmers and big hair that became the trademark of the decade.

There were many notable historical moments that took places in the 1980s: John Lennon was shot outside of the Dakota Hotel in New York City, New York, Prince Charles and Lady Diana were married in one of the most anticipated weddings of the century and the Berlin Wall fell.

Popular entertainment began to explode in the forms of music, television, video games and movies. Pac-Man, MTV, Walkmans and boomboxes were all introduced in “the Eighties.” Michael Jackson, Madonna, Doug E. Fresh and Bruce Springsteen topped the charts, and Americans flocked to see cutting-edge films like “Indiana Jones,” “Back to the Future” and “Top Gun.” 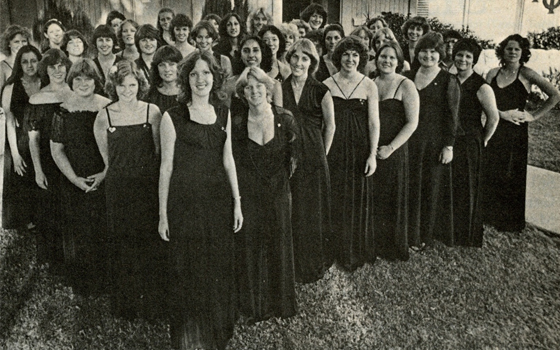 Delta Delta Chapter (California State-Fullerton) members pictured in “Happy to be Greek,” an article in the Los Angeles Times, 1980.