For the first time in 27 years, the 46th Convention met again at the Grand Hotel on Mackinac Island, Michigan, held July 1-7, 1954. Under the leadership of Grace Merrill (Northwestern, 1917) of Chicago, the newly created Philanthropy Board had been very successful and she reported that more than $38,000 had been contributed by the chapters in one year to local organizations focusing on child welfare, the camp program and various scholarships.

Fifty-five years after it was launched, the March 1955 edition of The Crescent took on a whole new look. When first created, the publication’s cover was a solid light brown decorated only with the monogram and a crescent moon. Those colors remained with only minor changes until February 1939, when the top third of the cover had the words, “The Crescent of Gamma Phi Beta” overlaid on a crescent moon, all on a white background. The bottom two-thirds featured a photo of a school building where a Gamma Phi Beta chapter was located. Then, in 1955, The Crescent shed its familiar cream and brown colors. Now the cover was printed on white stock with a colored stripe at the top and bottom framing the photos, again of a campus where a chapter was located. Held in very high esteem among Panhellenic publications, The Crescent contained interesting stories of Gamma Phi Beta achievements, profiles of prominent members and serious articles under the rather weighty heading, “Women in a Democracy.” 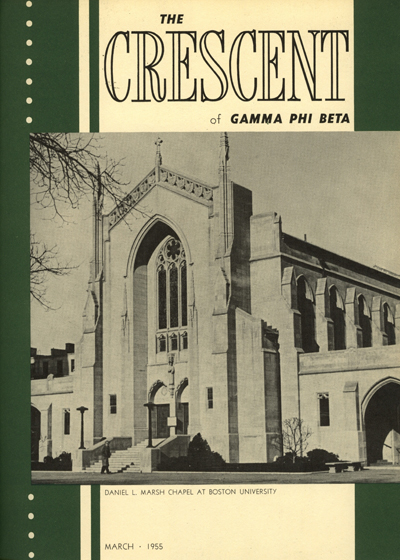 The March 1955 cover of The Crescent, featuring the Daniel L. Marsh Chapel at Boston University.