Throughout 1941, war with Japan was becoming imminent and on December 7, 1941, their invasion of Pearl Harbor made it a certainty. President Franklin D. Roosevelt spoke to the largest audience in radio history the next day, describing the horrors of the attack as “a date that will live in infamy.” Within three hours, Congress passed and President Roosevelt signed a declaration of war with Japan.

Although Gamma Phi Beta had plans to hold a Convention in Canada in 1942, the National Panhellenic Conference agreed to suspend conventions for the duration of the war, a decree that was quickly followed by a government ban on conventions of any kind. 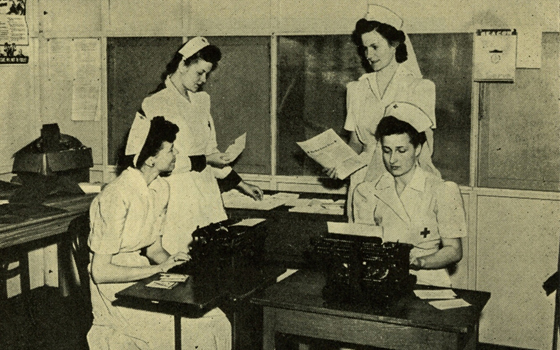 With so many of their members entering the military, many fraternity houses closed for the duration of the war. Social life ceased as the men left the campuses and many girls went through four years of college life without ever going to a dance. To protect against bombing raids that in an era of less sophisticated weaponry were conducted by sight, blackouts were ordered, primarily on the West Coast. Windows had to be completely covered and cars had to be driven without headlights, which meant that chapter meetings had to be held during the daytime and nighttime activities were almost impossible.

Pauline MacKenzie (Oregon, 1918) wrote in 1942: “Our Christmas dinner party at a local tearoom was very gay in spite of a threatened blackout. Twenty-four brave souls gathered with Christmas gifts for the children who attend Camp Whitaker, our local charity project. Following President Roosevelt’s radio address, we all stood and sang ‘The Star Spangled Banner’ but, shortly after, fire sirens on Grant Avenue sent us scurrying to our homes.”