In a gesture of economy, the Grand Council postponed the 1933 Convention. Alpha Phi Chapter (Colorado College), installed in 1932, hosted the 38th Convention held in June 1934 at the Broadmoor Hotel in Colorado Springs. Nearly five years into the Great Depression, the Sorority’s financial condition was sound, due largely to the Council’s economic management. Astute investments by Harris Trust Company, plus the fact that the insurance policies held by eight chapters matured in 1934, added $8,000 to the Endowment Fund. The collegiate chapter membership was larger than any year except 1929, in spite of decreased enrollment. 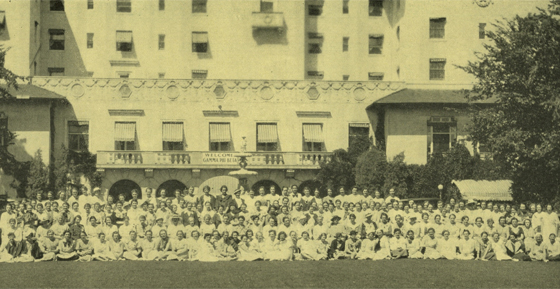 1934 Conventioneers at the Broadmoor Hotel in Colorado Springs, Colorado, as shown in The Crescent.

New parameters regarding the initiation of college graduates and qualified alumnae were added to the Bylaws that proved particularly valuable in colonizing new chapters. Delegates also learned that a new camp, the Sorority’s third, was established at Cape Henry, Virginia. Helen Turnbull (Goucher, 1928) of Baltimore, a Province officer, was appointed its manager.

Gamma Phi Beta’s first Canadian Convention was held at the Empress Hotel in Vancouver, British Columbia, Canada in 1936. Four hundred delegates arrived to find the Convention hall festooned with Canadian and American flags. Also at this Convention, for the first time, the final banquet was called the “Carnation Banquet” when thousands of pink carnations decorated the banquet room of the Empress Hotel. 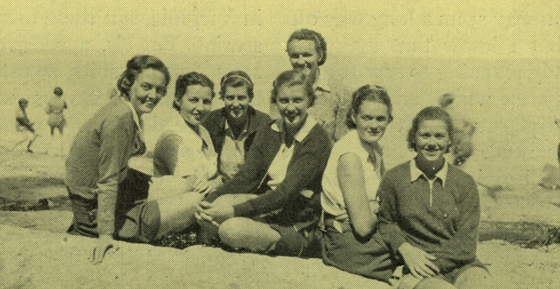 Gamma Phi Beta’s who served as camp counselors featured in the December 1935 issue of The Crescent.