While alumnae chapters and mother’s clubs were busy with benefits and rummage sales to add a few dollars to the treasury, lack of money did not seem to worry the collegians. The chapter letters from the period do, however, reflect a social calendar filled with simpler, less formal events. Ruth Rucker (West Virginia, 1934) wrote, “For our Christmas party about thirty girls, bedecked in gaily colored pajamas, played games, told stories, and best of all ate goodies until late, when fraternities serenaded them. Later, gifts were presented to each girl who had the privilege of keeping them or giving them to the community basket for underprivileged children.”

And the 1935 Kappa Chapter letter from the University of Minnesota said, “Spring activities included a Faculty Banquet at the house. At these banquets you find the man who has been glowering at you all year from a platform has the same feeling about stewed cabbage that you have and thinks that bread and peanut butter and jam make a lovely combination, in spite of stupid arguments to the contrary.”

During this time, the Sorority began selling Gamma Phi Beta playing cards to chapters “in an endeavor to assist collegiate and alumnae chapters with expenses.” Advertised in The Crescent, the cards were sold at cost and could be purchased in single or double decks of mode and brown at $0.85 a deck. In turn, chapters could sell cards to members for a profit and contribute the proceeds to chapter funds. 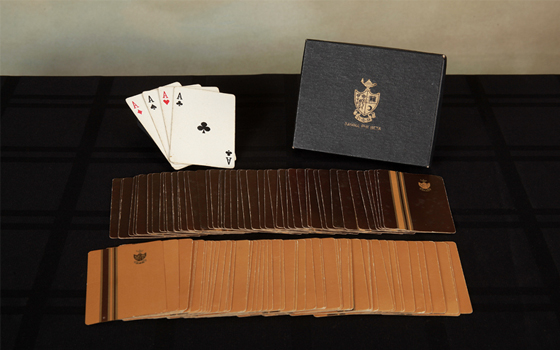 Playing cards sold by chapters during the 1930s. 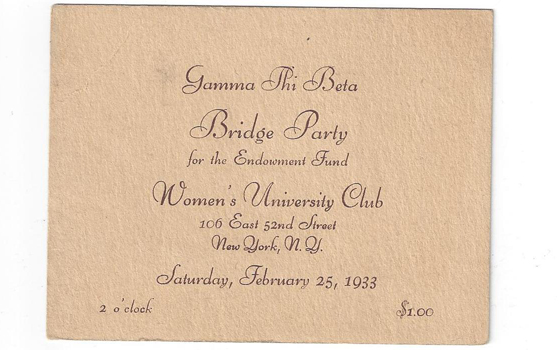 An invite to a Bridge Party hosted by Gamma Phi Beta in 1933.