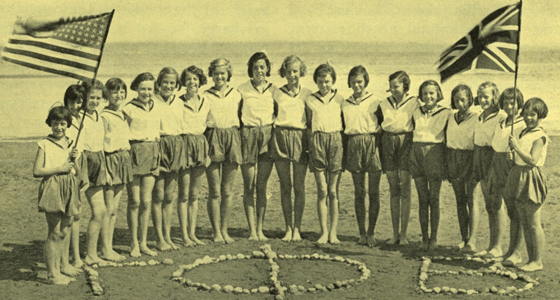 Young girls at a Gamma Phi Beta camp at Boundary Bay, as shown in the May 1936 issue of The Crescent.

Greek organizations across the board once again came under fire during the trying years of the Great Depression. The New York Times published a series of articles criticizing fraternities and predicting the demise of the Greek system. In a 1935 issue of The Crescent, Lindsey Barbee (Denver, 1897) expounded on the philanthropic achievements of National Panhellenic Conference organizations. And when Lillian Thompson (Michigan, 1892) gave her final report to the 1936 Convention before retiring as Panhellenic representative, she added, “We must encourage harmony and give social and moral values, and get rid of snobbishness if we are to survive in a world that wants value received.”