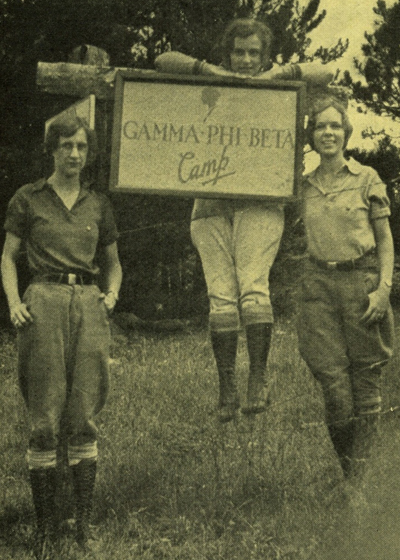 Gamma Phi Beta camp counselors pose with a sign from one of Gamma Phi Beta’s camps, as shown in the March 1932 issue of The Crescent.

For each of Gamma Phi Beta’s Founders, their faith was an integral part of their lives and they believed that service to their fellow man was, in essence, service to God. Early on, the Sorority’s charitable efforts were largely a matter of personal commitment. Some served as teachers’ aides and as tutors for underprivileged children, particularly children of immigrants. Their service to women — mostly through local churches — consisted of sewing classes, English classes for immigrant women and donations of food, clothing and other necessities.

In 1921, Lindsey Barbee (Denver, 1897) is quoted as saying that “in social service lies our opportunity to be of permanent aid to others.” With the Endowment Fund now on terra firma thanks to Ms. Barbee, the 1929 Convention adopted the Denver alumnae’s camping program as an international project. Kittie Lee Clarke (Denver, 1908), who led the camp project from its beginning, was made International Camp chairman. Vancouver alumnae were very interested in the project and quickly established a second camp in British Columbia. They had no way of knowing that in the months to come, America would be plunged into the Great Depression and that the camping program would become incredibly important to hundreds of young girls in desperate need of both fresh air and freedom.