“We stand upon the threshold of the 20th Century facing a still brighter dawn of civilization,” said New York Times. Though the nation was stunned by the assassination of President McKinely at the Pan-American Exposition in Buffalo, New York, and the subsequent replacement in office by Theodore Roosevelt, the turn of the century proved to be a decade of technological and cultural advancement. The first silent film, “The Great Train Robber,” premiered in 1903. That same year, Orville and Wilbur Wright successfully piloted the first powered airplane in Kitty Hawk, North Carolina. By 1908, the Ford Motor Company had begun production of the Model T, revolutionizing industry through mass production methods. Construction began on the Panama Canal. The first escalator was installed in Gimbel’s Philadelphia store after its display at the Paris Exposition of 1900. Fair-goers of the Louisiana Purchase Exposition in St. Louis were thrilled to discover the Ferris wheel – the one at the fair could carry two thousand people on a single turn. The turn of the century set the stage for America to become a global power. 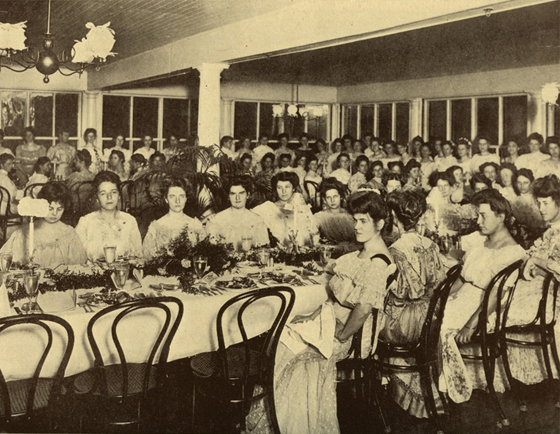 Sisters attending the 1905 Convention Banquet as shown in the January 1906 issue of The Crescent.