Gamma Phi Beta held its first Convention in 1883. It was decided then that each chapter should periodically write a letter to each of the other chapters as a way of keeping each other apprised of their news and activities between Conventions. These chapter letters continued on at least a semiannual basis and were quite sufficient at first, but in 1888, the Convention appointed a committee to develop a plan for creating a Gamma Phi Beta publication. The plan presented at Convention the next year stimulated a lively discussion, but no commitment emerged.

During the early 1890s, other sororities began issuing publications to the dismay of many Gamma Phis who wanted a publication of their own. Finally, a committee appointed at the 1896 Convention presented their plan three years later. Lillian Parker Allen (California-Berkeley, 1894) chaired the committee, which included Claribel Moulton (Boston, 1888), Mabel Mudge (Goucher, 1896), Nina Rogers Sweetser (Boston, 1893) and Mary Sanborn Richardson (Michigan, 1888). The plan they presented was accepted and Gamma Phi Beta’s newsletter, The Crescent, debuted in June 1900. The first issue contained a poem by Sarah Satterthwaite Leslie (Michigan, 1883), a story by Frances Gearhart (California-Berkeley, 1897), an article on fraternity life at the University of Michigan and a description of the Theta Chapter house in Denver. There were also two pages of personal notes and chapter letters. A small pamphlet, The Crescent’s light brown cover was adorned with a simple monogram and crescent. Within a few years, two carnations were added to the cover.

In recalling The Crescent‘s earliest days, Mrs. Sweetser modestly credited Delta Chapter (Boston) for doing the bulk of the work. She handled all the editorial work as well as the business management, though of the publication’s finances Mrs. Sweetser wrote, “Oddly enough, I can remember nothing of the first year’s finances. Perhaps we depended upon subscriptions; there were no advertisements. At all events the earlier issues had to be paid for, and maybe we ‘passed the hat.’ I am sure we must all have been relieved when the enterprise was put on a substantial financial basis.” No doubt the early issues contained many tactful solicitations for support and while the cost of the first edition remains unknown, documents show that in 1903, The Crescent took in receipts of $200.59 against expenses of $177.01 for a modest profit. 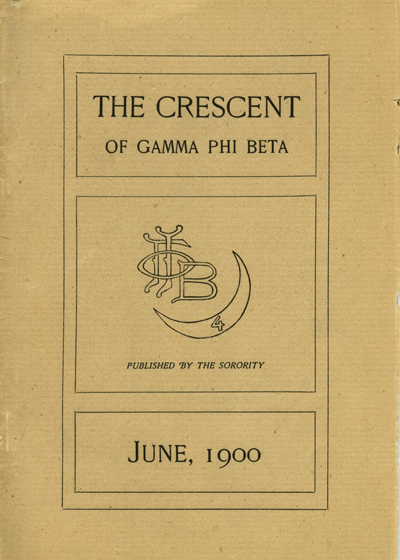 The first issue of The Crescent.