Gamma Phi Beta’s earliest advisors were primarily men who were more acquainted with the nature of fraternal organizations. As time went on, however, Gamma Phi Betas began seeking the counsel and advice of other women. For a short time, these women were referred to as Honorary Members, a designation that was soon exchanged for that of patronesses.

Most of the patronesses were wives of professors or well-known men within the community. At times their association provided financial assistance, but more often than not, they were called upon for social occasions, to lend their own credence to a project or to simply open their homes for entertainment. Virginia Montague, Alpha Zeta Chapter (Texas-Austin), class of 1928, wrote, “There is a time in the life of a chapter when the patronesses must be rushed. That time came this fall for Alpha Zeta. After about six weeks of personal calls by the different girls, the ‘rushing’ reached a climax in the patroness party, when we invited the patronesses and their husbands over for pledge supper, and a very special pledge supper it was. The pledges outdid themselves with their little skit and stunt. Oh, so clever!” 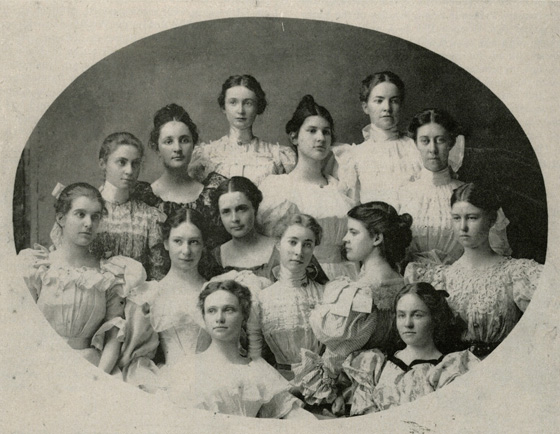 Members of Eta Chapter (California-Berkeley), 1897, as shown in the December 1958 issue of The Crescent.