Their organization solidified, the ladies went about the business of establishing the more public symbols of their alliance. There are multiple versions of how Gamma Phi Beta’s badge was created and questions remain as to whose idea various elements were. The process appears to have begun with Charles Moss, dear friend and later the husband of Frances Haven, who admired the badge of Alpha Delta Phi, a fraternity he’d proposed bringing to Syracuse University. Seeking to create something similar but not identical, he took credit for the idea of the crescent and the monogram, though it’s not certain whether the idea came from Mr. Moss, Mary Bingham or Charles Cobb, a mutual friend of Frances Haven and Charles Moss and very close friend of Mary Bingham. In any event, according to Helen, the ladies “readily agreed upon a monogram,” and her brother James, who was a divinity student at Syracuse, suggested the Hebrew numeral be added to the design.

What is certain is that Dr. Charles Cobb drew the design that was submitted to Tiffany’s. When his daughter Lois was initiated into Alpha Chapter in 1918, he sent the chapter the original drawing of the badge that he’d kept all those years. We also know with certainty that the badge’s design with final touches done by Tiffany’s of New York was approved on November 20, 1874, and that pledge (today, new member) Clara Worden was tasked with delivering the design to a factory on Genesee Street in Syracuse for manufacture.

The first badges were an inch in diameter, the monogram perfectly flat against the crescent, a three-inch long chain connecting the letter “S” for Syracuse to the badge. The badges arrived on Wednesday, December 16, 1874, four days later than expected and just two days before the end of the term but in time for the ladies to march into chapel proudly wearing them for the first time. 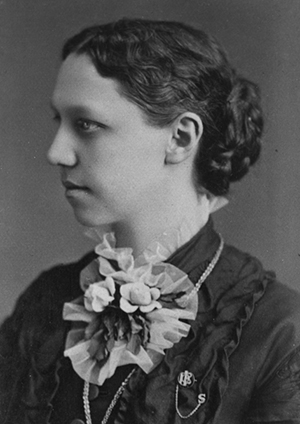 Helen M. Dodge wearing one of the first badges. The letter “S” connected to the badge by a chain stood for Syracuse. 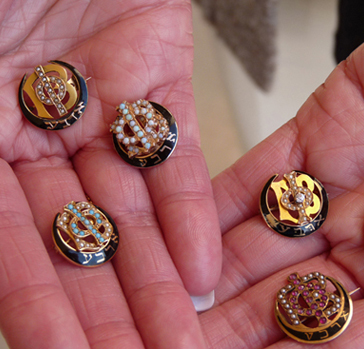 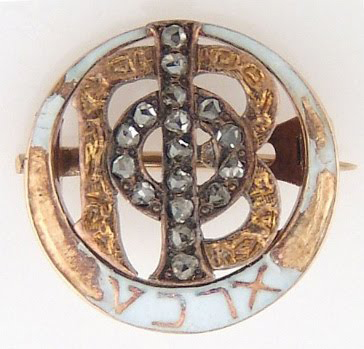