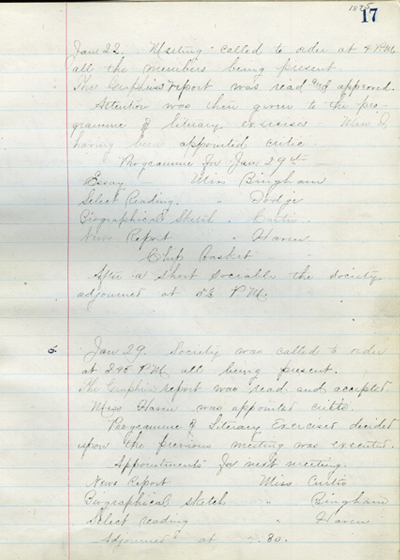 The earliest meetings were held on Friday afternoons and illness was the only accepted excuse for absence. Each meeting included literary exercises and members read their original essays or news reports of the day. At each meeting, someone was chosen to be “Critic,” whose job it was to ensure the group’s grammatical perfection. Subjects for discussion were drawn from the “chip basket,” a small wicker basket into which each member placed a slip of paper with a topic of current interest. Each girl in turn drew a slip from the chip basket and spoke on the topic, but if the subject proved too detailed for an extemporaneous talk, the member was allowed to write a theme on it and present it at the following meeting. More controversial topics were used for debate and included the value of travel as an educational resource, the exclusion of the Bible from public schools and the alleged inferiority of women’s minds. On a much lighter note, Adeline and Helen often contributed original songs and led the musical part of the day’s program.