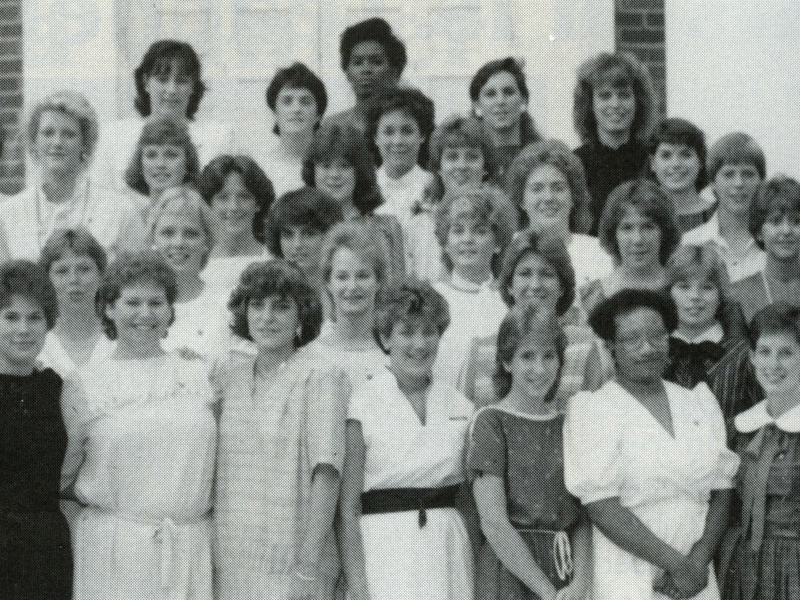 Some of Epsilon Beta Chapter’s charter members in 1984.

Epsilon Beta Chapter was installed at Alma College in Alma, Michigan, on September 22, 1984.

In 1984, Epsilon Beta Chapter members were active, involved campus leaders. They participated in marching band, choir, varsity athletics, cheerleading and other campus organizations, and were resident assistants. The Panhellenic president at the time was a Gamma Phi Beta. The chapter was the largest on campus and ranked first in scholarship.

Installation weekend began with an evening reception in the Van Dusen Campus Center. It was attended by colony members, local alumnae, alumna initiate candidates and international officers. Gamma Phi Betas celebrated their Initiation at the Installation banquet in the Van Dusen Campus Center. The initiates’ family members, friends and Alma College’s president, Dr. Oscar Remick, and his wife were all in attendance. Dr. Remick spoke on the role of Gamma Phi Beta at Alma, emphasizing, "excellence with relevance." A silver punch bowl and ladle from the Sorority, a silver platter from province IV, among other gifts were presents to the chapter. The evening's events closed with Epsilon Beta members singing "Qui peut faire," the song with which they won Songfrest.