Without struggle, the Gamma Phis did, indeed, pay homage to the remaining Founders at the 34th Convention the following year, postponed until 1924 to coincide with the Sorority’s 50th anniversary. Hosted by Alpha Chapter (Syracuse) and the Syracuse Alumnae Chapter, the Convention was held at Lake Placid in the heart of the Adirondack Mountains. After the business session, the delegates went by train to Syracuse for a tour of the campus and inspection of the new Alpha Chapter house. Two hundred and seventy-five women attended this Convention filled with “firsts” and “lasts.”

This was the first time the Crescent Moon was distributed during Convention to provide a daily guide for delegates and visitors. It was also the first time a memorial service was held at Convention, this time to honor the passing of Adeline Curtis. This same memorial service is still preformed at each Convention. It was the last Convention at which any of the Founders would be present and those attending were privileged to hear the Scripture read by Helen Dodge Ferguson and the ritual conducted by Frances Haven Moss. At the closing banquet at Lake Placid, Helen and Frances were presented with diamond and platinum badges. Afterwards Frances wrote, “I shall always treasure it and wear it; but the most comforting thought is that Convention found me worthy — that I had proved good.” And of those days at Convention she added, “The hours at Lake Placid will be treasured for their fairylike surroundings; those at Syracuse for the tender memories they awakened. The whole experience was the crowning glory of a long and happy life.” 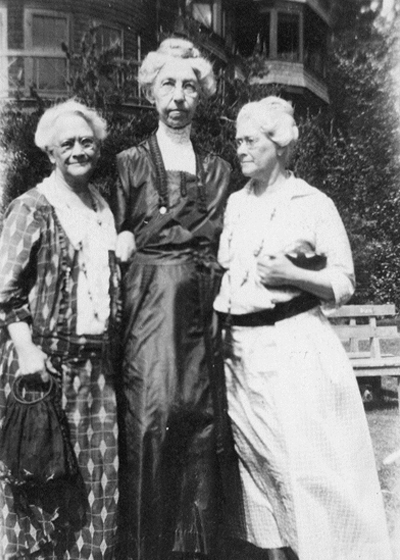 Helen Ferguson bequeathed her badge to the Sorority, and after her death in October 1937, her diamond pin became the Grand President’s badge, to be worn during each woman’s term of office. Helen’s badge was retired in 1966 to assure its preservation. 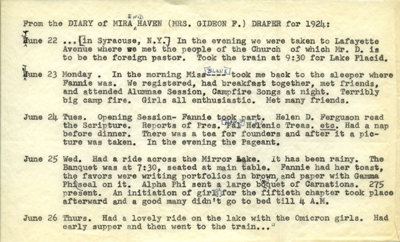