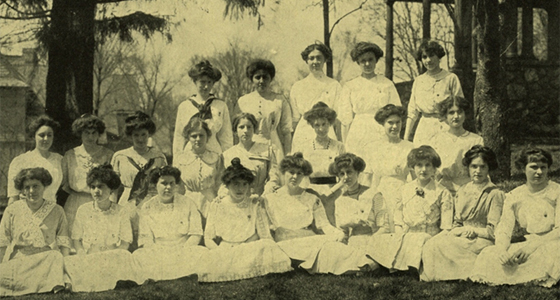 Members of Beta Chapter (Michigan) as shown in The Crescent, June 1912.

The attempts at progress that characterized the turn of the century continued through the 1910s. Women’s suffrage, birth control, education and prohibition were controversial topics of the decade. The National Association for the Advancement of Colored People, formed in 1909 after the Race Riot of 1908, began gaining legitimacy and was incorporated in 1911. However, the early part of the decade was not without tragedy. Despite technological advancements made in transportation, more than 1,500 passengers lost their lives when the RMS Titanic struck an iceberg in April, 1912.

In 1917, Congress and President Woodrow Wilson declared war on Germany. After nearly ten million American men signed up for the draft, women took over the jobs that soldiers had to leave behind – despite being paid a fraction of the usual wage. Those who did not join the war efforts abroad were required to conserve materials at home: coal was conserved on “heat-less Monday” and gas on “gas-less Sunday.” On November 11, 1918, the Armistice was declared and the troops returned to the United States. Prohibition was officially declared in 1919 with the ratification of the 18th Amendment.