Immediately after war was declared, Gamma Phi Beta collegians and alumnae volunteered with the Red Cross folding bandages, sewing and knitting. Among the 36 Gamma Phi Betas who went to Europe to work for the Red Cross or the War Department was Florence M. Patterson (Northwestern, 1895), who was assistant director of nursing for the Red Cross in Washington, D.C. She was sent to Romania as head of nursing for a 500-bed hospital, a job for which she was decorated by Queen Marie of Romania. Americans supported the soldiers and the war effort in a variety of ways and Gamma Phis were no exception. Katharine Leach (Colorado State, 1917) wrote, “We have so many meatless, wheatless and fatless days that I sometimes think I could eat a whole pound of butter with nothing under it. But aren’t we glad that we can do our small bit?” Unlike our modern army supplied with high-tech equipment, America’s World War I soldiers welcomed anything that would help them endure the cold winters of Northern Europe in the trenches. Lucy Scales (Iowa, 1916) wrote, “It is comical to see little girls lugging huge bags about stuffed with knitting. They knit on the streetcars, in the library, in the classrooms, at meetings, in the stores and at home.” 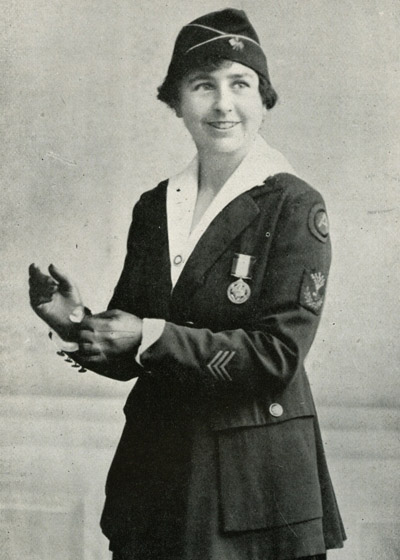 Grace Banker (Barnard, 1912), winner of the WWI Distinguished Service Medal from Lieutenant General Hunter Liggett for her work during the St. Mihiel drive.