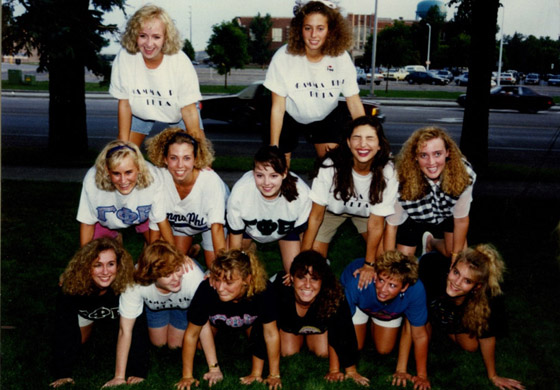 The style of the decade shifted from big hair and acid wash jeans to flannel and Dr. Martens as “grunge” became popular in the 1990s, while other Americans sported “the Rachel” – a haircut made famous by Jennifer Aniston on the hit television show “Friends.” The Spice Girls, Backstreet Boys, *NSYNC and Britney Spears topped the charts and were sharply countered by the also popular “punk pop” work of Blink-182, Green Day, Social Distortion and the like. “Titanic,” “Jurassic Park,” “The Lion King” and “Forrest Gump” were among the highest grossing films of the decade and video gaming systems like PlayStation and Nintendo became commonplace in homes across the continent.

Also in “The Nineties,” the Hubble Space Telescope was launched into orbit, the Gulf War commenced in the Middle East, Dolly the sheep was cloned and Diana, Princess of Wales, perished in a deadly car accident in Paris, France.

Twenty-one Gamma Phi Beta chapters were installed during this decade.