On April 26, 1992, International President Jolene ‘Joey’ Lessard Stiver (North Dakota State), served as Mistress of Ceremonies for the dedication of the new International Headquarters at 12737 East Euclid Drive in Centennial, Colorado. A Dedication Service prepared by former Grand President Audrey Weldon Shafer (Missouri-Columbia, 1938) followed a ribbon-cutting and the unveiling of a monument erected to honor the donors. Ann Mullen Bronsing (Indiana State), also a former Grand President, gave an address, as did the endowment-loan board chair, the Denver Alumnae Chapter president and the Theta Chapter (Denver) president. Those in attendance were treated to a guided tour and a video presentation by Ryden Associates chronicling the construction of the International Headquarters. 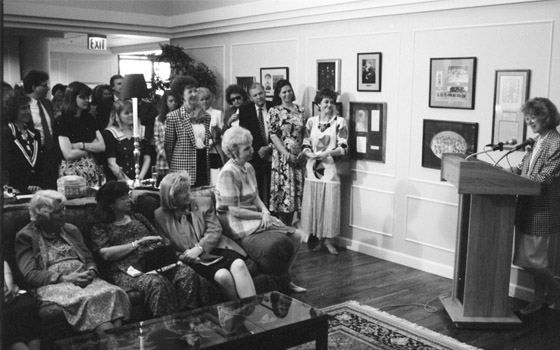 Upon entering, the visitor is welcomed by a beautiful chandelier, taken from the Paramount Theater in downtown Denver when it was refurbished and then donated by the J. O. Pollack Company. A welcome area features comfortable and attractive living room furniture in front of a fireplace amid walls lined with photos and lighted cases displaying Gamma Phi Beta treasures.

The 10,000-square-foot structure was designed by the architectural firm of Mitchell, Buss, and Associates of Denver and built on a 3.25-acre parcel. Executive offices of both the Sorority and the Foundation line the building’s perimeter, surrounding smaller offices and cubicles for staff members. There are two conference rooms, a mailroom and an attractive kitchen and snack area. 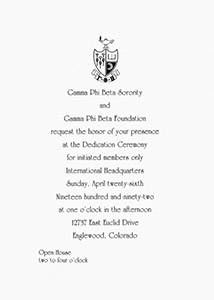 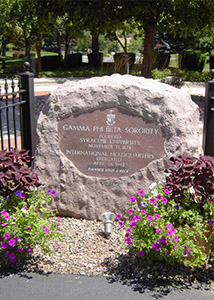 Rock outside of International Headquarters in Centennial, Colorado.