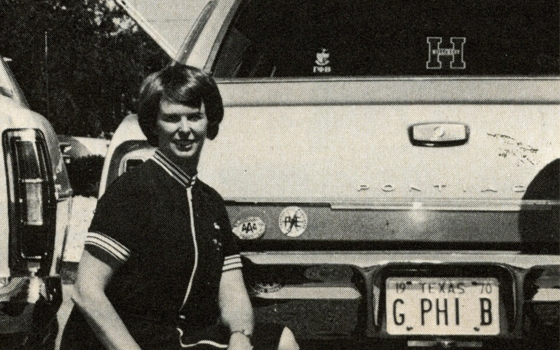 The 1970 Convention chairwoman poses with a special license plate.

The 1970s were a turning-point in American culture. Dubbed “The ‘Me’ Decade” in an influential essay by Tom Wolfe in The New York Times, young adults who were raised during the prosperity of post-war America began to stray from the sense of community and toward individualism. “The Seventies” hosted an abundance of historical highs and lows: the Ohio National Guard opened fire on protesters at Kent State University, President Richard Nixon resigned from office following the Watergate scandal, American troops left Vietnam, the miniseries “Roots” aired and earned 36 Emmy Award nominations. Abroad, Margaret Thatcher was elected as the first – and only, to date – female British Prime Minister.

Many technological advances were made in the 1970s and the decade is often noted as having given rise to modern computing. The first email was officially transmitted in 1971, consumer video games became available and IBM released the earliest version of the floppy disk to the public. In a garage in Los Altos, California, Steve Wozniak and Steve Jobs started the Apple Computer Company. VCRs and microwave ovens also became commercially available during The Seventies. Environmentalism, feminism and civil rights movements carried over from the 1960s became even more influential during this time.