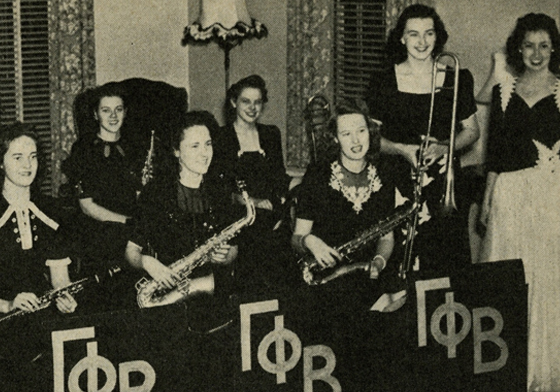 On the morning of December 7, 1941, Americans were shaken by the attack on Pearl Harbor, initiating the United States’ involvement in World War II. By 1942, American soldiers were making their way across the Pacific, leaving women with the opportunity to lend a hand in the workforce. “Rosie, the Riveter” became a symbol of strength for the 3.5 million women working on assembly lines in war plants. Women not only played a vital role at home during World War II, but also joined the effort overseas. American and Canadian women served as mechanics, code clerks, typists, truck drivers and as pilots ferrying planes. In total, more than 300,000 women served in these roles.

President Franklin Roosevelt was re-elected for an unprecedented fourth term in 1944, but a cerebral hemorrhage caused his death shortly after. In 1945, Roosevelt was succeeded by Vice President Harry Truman, who shortly after his inauguration ordered the atomic bombing of Hiroshima and Nagasaki. On August 15, 1945, Japan announced its surrender and World War II came to an end.

Though many advancements made during this decade were war-related, popular items like the microwave oven, Velcro, Tupperware and the Slinky made their first appearances in the 1940s. The carving of Mount Rushmore was concluded during this decade, Marvel Comics introduced Captain America and Charles Yeager became the first man to break the sound barrier.

Ten Gamma Phi Beta chapters were installed during this decade.