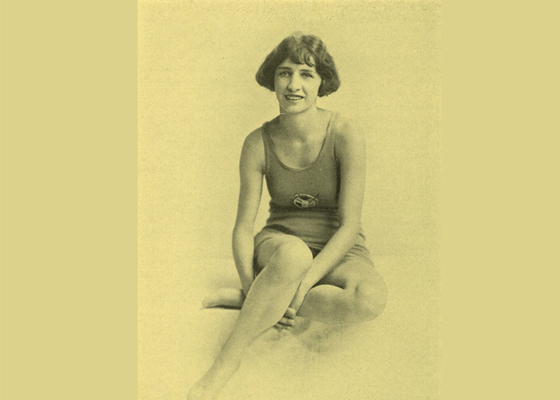 Sybil Bauer (Northwestern, 1920), as shown in the September 1924 issue of The Crescent.

The Lake Placid Convention also saw the approval of Margaret Meany Younger’s (University of Washington, 1910) plan to divide the Sorority into Provinces, each with a supervisor for the chapters within a given district. The goal was to provide better supervision and unification of the chapters within each Province. The supervisors were to be under the leadership of a Council member given the title Chairman of Inspection. Under Mrs. Younger’s plan, the number of districts was increased over the prior visiting delegate system, making it possible for the supervisors to visit their chapters more frequently.

With the adoption of the Province system, the titles of District Supervisor and Visiting Delegate were dropped forever. The honor of holding the first Province Conferences – Gamma Phi Beta’s forerunner to today’s Regional Leadership Conferences – went to Province IV when alumnae and Greek-letter chapters in that district met March 5-6, 1926, in Shevlin Hall on the campus of the University of Minnesota. In May 1926, Province III met in Lawrence, Kansas, as Sigma’s (Kansas) guests. In November 1926, Province II met in Ann Arbor and Province V in Denver.

During the 1924 Summer Olympics in Paris, France, Sybil Bauer (Northwestern, 1920) won a gold medal in the women’s 100-meter backstroke. It was the same year that swimmer Johnny Weissmuller, who later gained fame playing Tarzan on the silver screen, won three gold medals in swimming and one bronze in water polo.