But American soldiers weren’t the only ones who needed help. German-occupied Belgium and northern France found their food supplies requisitioned to feed the German army. Many faced imminent starvation. Shortly after the U.S. entered the war, Gamma Phi Beta’s Grand Council adopted a French orphan, Louise Miroux, and several collegiate chapters followed suit. However, an even larger effort was about to be launched.

Herbert Hoover, then chairman of the Commission for Relief in Belgium, appointed Charlotte Hoffman Kellogg (California-Berkeley, 1896) to chair the Stanford arm of that organization. As the only woman member of the commission, Mrs. Kellogg spent the last six months of 1916 in Belgium where her husband, Professor Vernon Lyman Kellogg of Stanford University, was in charge of the chief office of the commission on the field at Brussels. 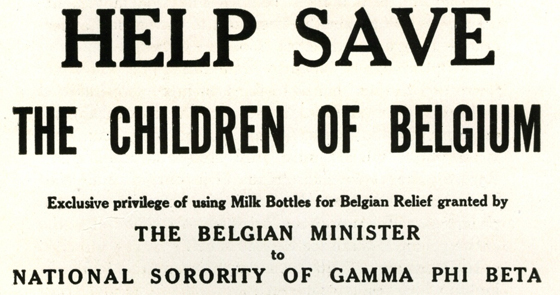 In the spring of 1918, Charlotte Kellogg suggested that all college and alumnae chapters place in their cities wooden stands holding two-quart milk bottles to hold pennies. The stands were rigged to thwart any attempts to steal the coins and a poster bore a picture of a Belgian baby and an appeal for help. The plan was enthusiastically received and the Milk Bottle Campaign got underway.

The campaign spread from the West Coast to the East Coast. The Denver Tribune wrote, “Twenty stands, topped by small milk bottles, now invite stray coins at moving picture theatres, hotels, and stores for milk for the little ones, sponsored by the Gamma Phi Beta Belgian Relief Committee.” Though the poster said, “Every penny counts,” one bottle in California received a jeweled ring that was sold for $300.

The 1918 influenza pandemic, a particularly virulent strain, closed theaters and many other public places. Despite that challenge, Gamma Phi Beta reported in December 1918 that the Sorority had sent approximately $7,000 for aid of Belgian children. With the signing of the armistice on November 11, 1918, the Milk Bottle Campaign was closed but the support for the adopted orphans continued for many years.

Mrs. Kellogg wrote a book entitled “Women of Belgium,” the proceeds of which she gave to the Belgian cause. The Denver Post wrote, “Possessed of a strong personality and an indescribable charm, she has won many hearts and dollars for Belgium.” 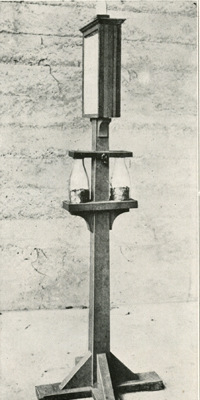