A contest was put into motion for the 1915 Convention to select a crest for Gamma Phi Beta. Several designs were submitted for the competition and Gertrude Comfort Morrow (California-Berkeley, 1913), a graduate of the School of Architecture at the University of California and a Phi Beta Kappa, submitted the design chosen by the Convention body. This design, which Gamma Phi Beta now refers to as their crest or coat of arms, remains in use to this day.

The banquet was held at the Palace Hotel in San Francisco and on the last evening at Asilomar, Gamma Phi Beta held its first model Initiation. The first candidates ever to be initiated at a Convention were Jeanette Dyer (California-Berkeley, 1915) and Elender Wills (California-Berkeley, 1915); Kanena Mackenzie (Minnesota-Twin Cities, 1915); and Helen Humphrey (Colorado State, 1915).

In 1915, Alida Moss was initiated at Omicron Chapter (Illinois at Urbana-Champaign). She was the only daughter of a Founder to be initiated as a member of Gamma Phi Beta. 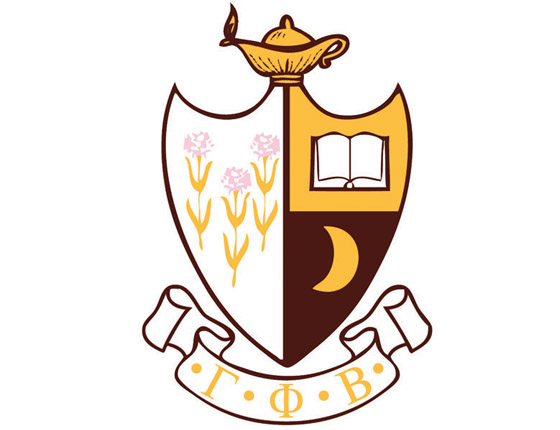 Gamma Phi Beta’s crest. The use of color on the crest was not approved and adopted until 1965.