On November 25, 1913, Gamma Phi Beta went to the White House when Jessie Wilson (Goucher, 1905), daughter of President Woodrow Wilson, was married to Francis Sayre. Both Jessie and her sister Margaret Wilson (Goucher, 1904) attended Goucher College while their father was president of Princeton University. Their mother’s sister, Margaret Axon Elliot (Goucher, 1899), had been a Gamma Phi Beta at Goucher College, graduating in 1902. Both Jessie and Margaret were popular members of Zeta Chapter and Jessie was also a member of Phi Beta Kappa, an academic honor society.

Jessie Wilson, seated third from left, with her Zeta Chapter sisters in 1906. 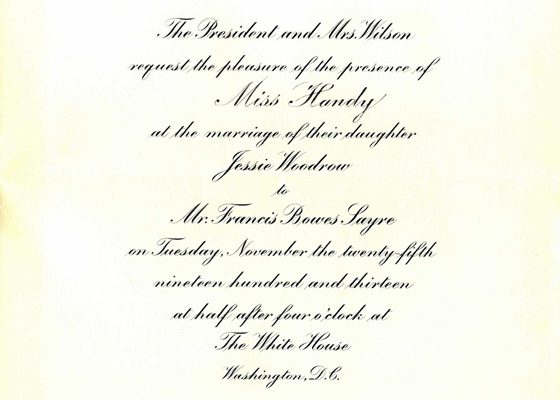 Margaret – who later served as First Lady after her mother’s passing and before her father’s remarriage – served as her sister’s bridesmaid and seven of Jessie’s Gamma Phi sisters were invited to attend the ceremony held in the East Room complete with the Marine Band in scarlet coats and guests lined up on either side of a white-ribboned aisle. Margaret Handy (Goucher, 1908) wrote in The Crescent: “Jessie was more beautiful than ever before. Only a few people at a time were allowed to go into the Blue Room, there was no formal line nor anything to suggest that it was more than a quiet home wedding. We chatted a moment with the President and Mrs. Wilson and went across the room to greet Jessie and Mr. Sayre. Surely no one but the Wilson’s could have done it in just that way. When we drove away we decided it was the nicest, most informal and happiest wedding we had ever attended.” 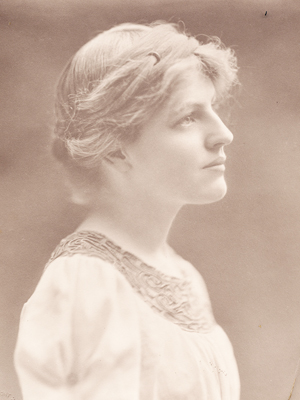