The Founding of Gamma Phi Beta 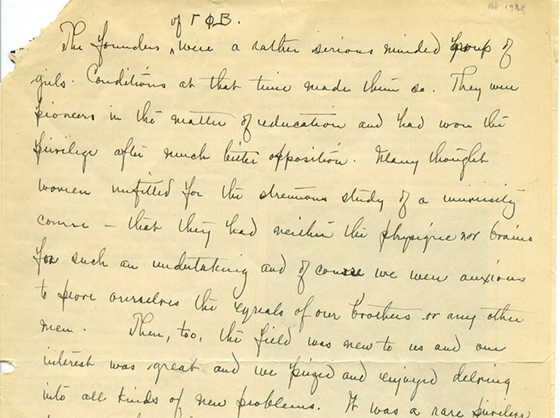 More than 50 years had passed since the founding of Gamma Phi Beta when one of its Founders, Frances Elizabeth Haven, wrote to her friend and Sorority sister Nina Gresham (Illinois at Urbana-Champaign, 1913) on February 19, 1930, recalling those days. She wrote, “The Founders of Gamma Phi Beta were a rather serious minded group of girls. Conditions at that time made them so. They were pioneers in the matter of education and had won the privilege after much bitter opposition. Many thought women unfitted for the strenuous study of a university course, that they had neither the physique nor the brains for such an undertaking and, of course, we were anxious to prove ourselves the equals of our brothers or any other man.”

The perseverance of Gamma Phi Beta’s Founders and other women like them, moving forward against the sometimes glacial pace of social evolution, has made it possible for today’s young women to assume their right to enjoy all the opportunities afforded their male counterparts. That is why, to fully understand their achievement, we must go back and examine their task within the framework of their own time.