Gamma Psi Chapter was installed at the University of Northern Iowa in Cedar Falls, Iowa, on November 23, 1968.

Former members of Delta Delta Phi local sorority, along with their alumnae, were welcomed to Gamma Phi Beta on April 28, 1968, bringing with them a heritage of 60 years on campus of the University of Northern Iowa. Colonization was under the direction of Director of Expansion Elna Erickson Simons (Birmingham-Southern), assisted by Marilyn Bachnik Callahan (Wisconsin-Oshkosh) and Mary Walstad Hoffmann (North Dakota State), field secretaries*, who stayed with the girls during their new member period. Conducting the ceremony was Omega Chapter (Iowa State). Mary Babbitt Bilby (Arizona, 1941), the new director of expansion, was in charge of installation on November 23, 1896, with the Initiation of 70 chapter members and 37 alumnae by Rho Chapter (Iowa). At the banquet that evening, Grand President** Barbara Burns Hiscock (University of Washington, 1939) presented the Gamma Psi charter to Chapter President Carole Baumgarten Yost (Northern Iowa). 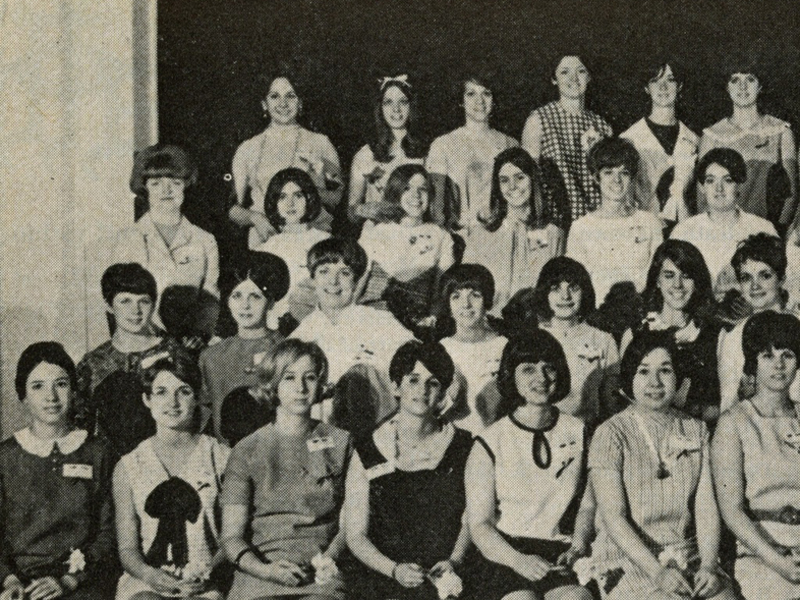 Some of Gamma Psi Chapter’s charter members in 1968.