A History of International Headquarters

This history was written for the 1992 dedication of Gamma Phi Beta’s International Headquarters in Centennial, Colorado.

Gamma Phi Beta was "founded upon a rock" by four dedicated women, Helen M. Dodge, Frances E. Haven, E. Adeline Curtis and Mary A. Bingham on November 11, 1874. Their vision for the Sorority inspired those who followed to establish an efficient and effective way of conducting the business of Gamma Phi Beta.

As Gamma Phi Beta expanded from the original Alpha Chapter, it became imperative that the chapters communicate with one another. Two chapters, Alpha and Beta, made up the entire Convention body in 1883. At this Convention, it was decided that each Gamma Phi Beta chapter would write a report about chapter business and send it to other Gamma Phi chapters. This included personal news about members' engagements, marriages and travels, as well as chapter and college information. This practice continued for twenty years. This was the precursor of our Sorority magazine, The Crescent.

In addition to the chapter letters, each chapter wrote a yearly summary which was neatly copied, through 1889, into a special leather notebook by the Convention secretary.

With a desire to continue the close communication and build upon the budding sisterhood, the 1893 Convention gave authority to an Executive Board of three alumnae to transact Sorority business between Conventions. These very young women, recent college graduates, were our first Grand Council. Later, in 1916, the Grand Council sent bulletins to the Greek-letter chapters for the first time. These early communications and those in previous years originated from the homes of Greek-letter chapters or alumnae members.

As our chapter roll grew to 23 undergraduate chapters and an increasing number of alumnae chapters were being formed, a proposal to establish a Central Office to conduct Sorority business was presented at the 1919 Convention in Estes Park, Colorado. Lack of funds at that time made it impractical to consider either an office or a staff. However, discussion of this step forward had begun.

At the Lake Placid, New York Convention in 1924, Lillian Thompson (Beta) presented a plan for a modest Central Office to transact Sorority business. It specified a location in the Chicago area and also outlined the need to employ an Executive Secretary. Much enthusiasm for this idea was generated, yet no actual provision for office expenses was made. Several years elapsed before the Central Office became the reality that Lillian Thompson envisioned.

Mary T. McCurley (Zeta), Secretary-Treasurer of Grand Council, reported in 1927 that a tiny room in the basement of the Zeta chapter house at Goucher College was rented annually for $180 in which Anna Boardman (Upsilon), Secretary, conducted Sorority business. Anna Boardman was delighted to have the use of a mimeograph machine with which to duplicate the Constitution and Bylaws for distribution.

Later, with a move to Evanston, Illinois, Gamma Phi Beta's office was a very small room in Epsilon's chapter house. Alice Dibble (Epsilon) was the Secretary responsible for assisting with communication between chapters and Grand Council. 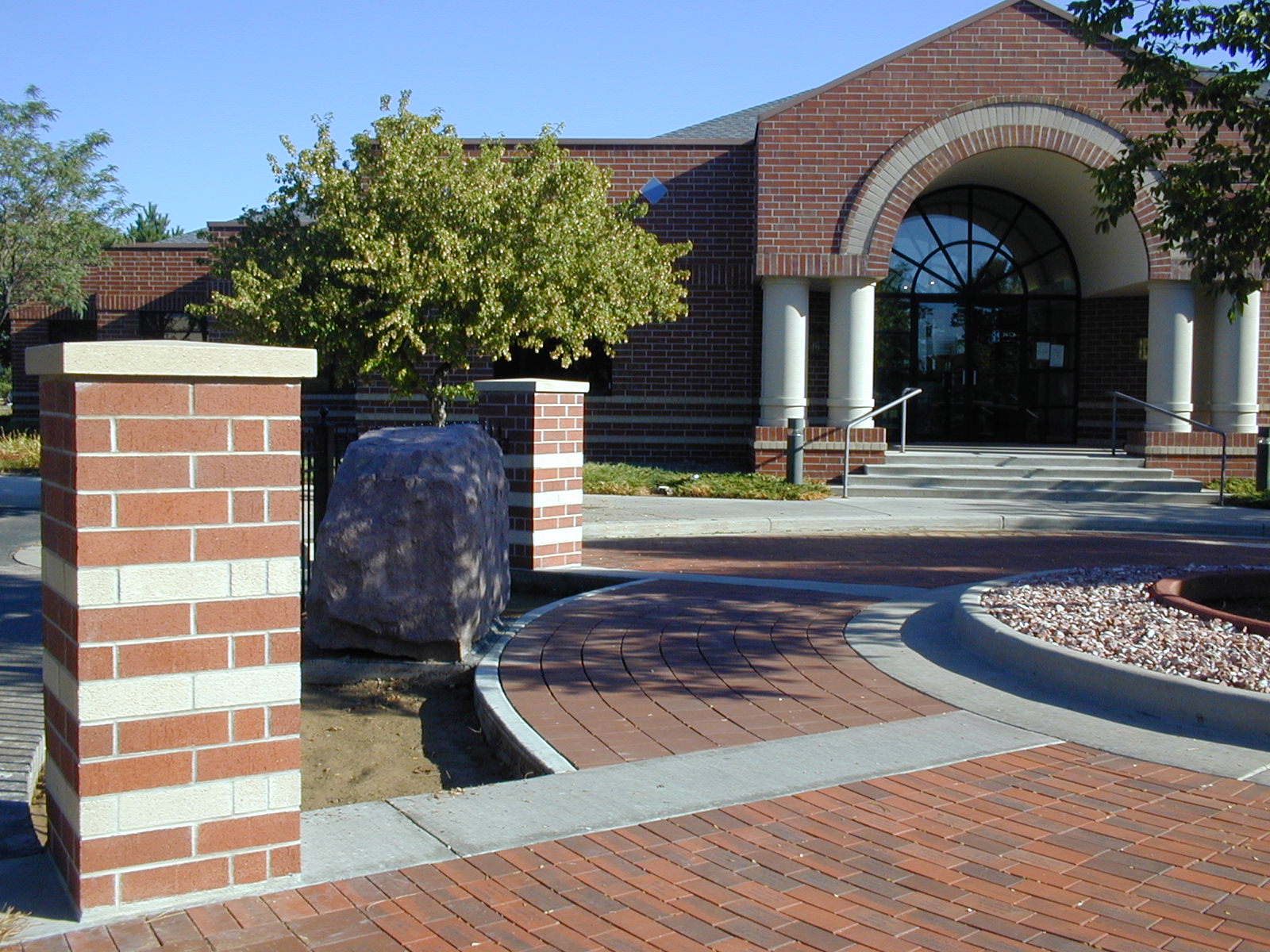 Gamma Phi Beta opened its first office separate from a chapter house in September of 1929 in the Pittsfield' Building in Chicago, Illinois. Charlotte Robertson White (Phi), served as Secretary from 1929-40 and as Executive Secretary-Treasurer from 1940-1947. She developed the office to a high standard of efficiency which became, at the time, a model for other National Panhellenic Conference sororities to emulate. At that time, all written communication was done on manual typewriters and copies of letters, minutes and other Sorority business were made on carbons and circulated. Early letters show a high level of typing skill and a Council member unlucky enough to receive the last carbon copy needed good eyesight to read the pale copy. An addressograph was used to stamp out metal address plates for the entire membership of the Sorority. Long distance telephone calls were very expensive and not very satisfactory, so business continued to be done through the mail. In cases of urgency, telegrams were used.

In 1942, Central Office moved to the Civic Opera Building in Chicago, Illinois under the supervision of Mrs. White. Evelyn Gooding (Omicron) became Executive Secretary-Treasurer in 1947 and later became Grand President in 1950. Ruth J. Wood (Beta) followed in 1948 and proved vital to the continuing progress and efficiency of Central Office.

After Central Office moved to 53 West Jackson Boulevard, Monandock Building, in Chicago, Mary Jane Hipp (Alpha Phi), who formerly worked as a traveling secretary, served as Executive Secretary-Treasurer from 1951-1956. She later served on Grand Council as Director of Finance. Although Gamma Phi Beta was moving to more comprehensive member records, it was still typical procedure to record a member's change of address by simply crossing out the old address and writing the new address on a notecard by hand. The succeeding Executive Secretary-Treasurers, appointed by Grand Council, were Janice Gray Perrizo (Epsilon), who served from September 1956 to December 1957; Marie Daley Hildebrand (Rho), January to September 1958; Ruth J. Wood (Beta), September 1958-May 1963; and Eleanor J. Sieg (Rho), 1963-1975. 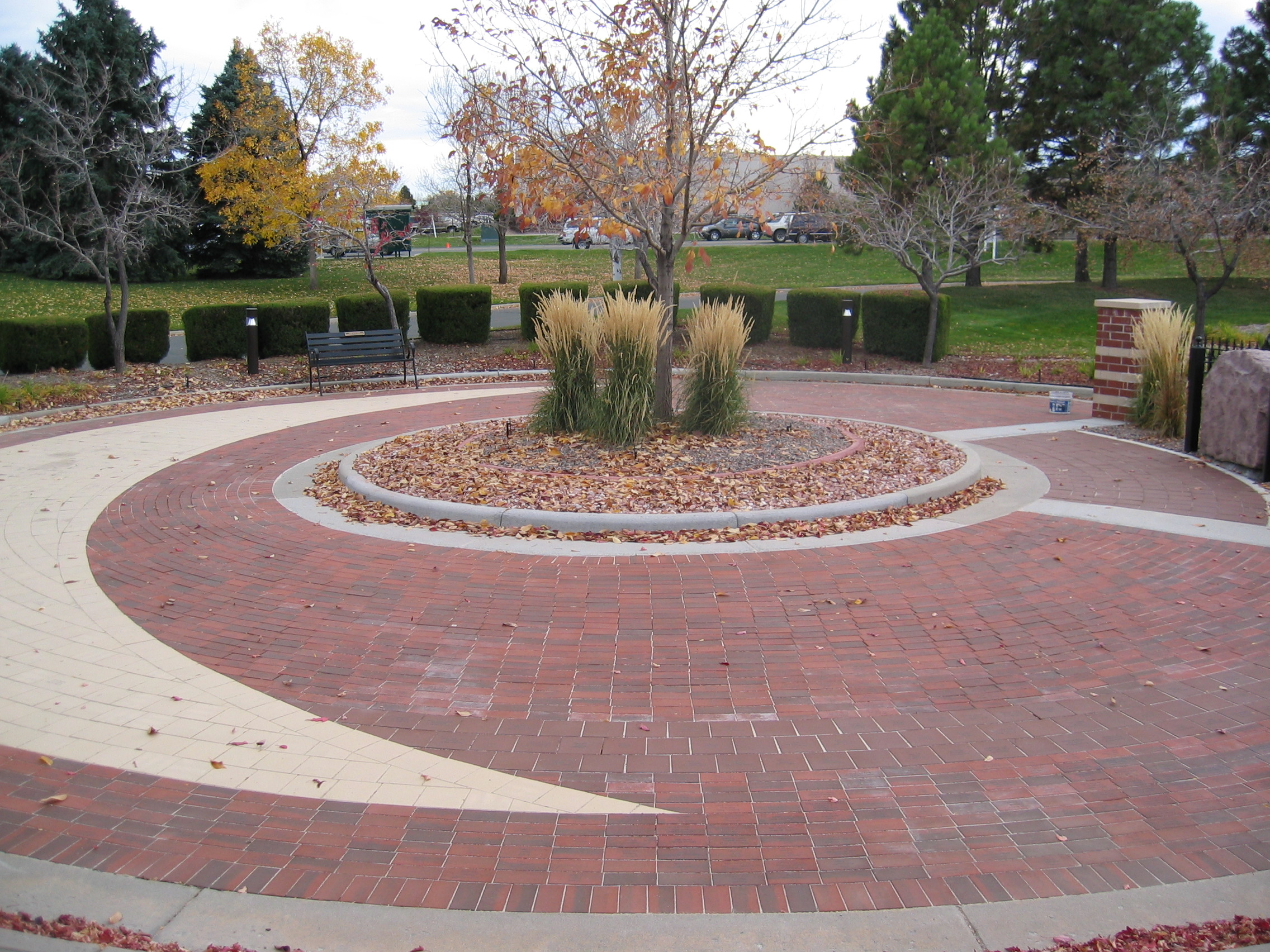 The downtown Chicago location eventually proved too small for an efficient operation to serve the ever-growing number of chapters and international officers. Hence, Central Office was relocated to 630 Green Bay Road, Kenilworth, Illinois in April, 1965 under the supervision of Miss Sieg, as she was known by collegians and alumnae alike. She had an imposing presence and brought to the position a keen understanding of finance and investments which greatly benefited the Sorority.

This newest location boasted three private offices, a conference room, kitchen, rooms containing addressograph equipment and office supplies, and sufficient parking for visitors and office staff, which had grown to seven members plus three traveling secretaries who worked out of Central Office. Pictures of the office at this time show a utilitarian working space with linoleum floors and metal desks. To those who had used the previous office, this was a real improvement. Eleanor Sieg's accomplishments were many; chief among them was supervising the change from handwritten membership records on individual cards to a computerized system of membership files.

Mary Margaret Moxley, an alumna initiate of Epsilon Chapter, joined Central Office and Grand Council in July of 1975 after many years working in administrative capacities for the American Red Cross. When she retired in 1979, the lease had expired on the office building in Kenilworth and it was time to look for another home.

Grand Council did a tremendous amount of research before deciding to move to Denver, Colorado. Many factors went into their decision; among them were the availability of a large work force, a reasonable cost of living and ease of transportation in and out of a metro area. More and more Gamma Phi officers were traveling for the Sorority and reasonable and convenient transportation became even more important.

In the summer of 1979, Jonette Crowley (Beta Rho) Executive Secretary Treasurer from 1979-1980, supervised the move from Kenilworth to 7503 Marin Drive, Englewood, Colorado. This was a suite of offices in a three story office building situated in an attractive office park on the southeastern side of the city. While simultaneously supervising the closing of the Kenilworth office by holding garage sales, recruiting neighborhood children to carry boxes during the move and cleaning out years of dusty and unused files, she also trained the Kenilworth staff to train collegiate consultants about Central Office procedures so they, in tum, could train the new employees hired in Denver. Miss Crowley, with a recent Masters degree in Business Administration, earned when she was a Gamma Phi Beta Graduate Counselor. worked extensively to establish new banking relationships, hire new staff members and streamline Central Office operations. The office quarters were not ready for Gamma Phi Beta for six weeks following the move, so Sorority business was conducted out of cardboard boxes in a temporary office. When the office was complete, it included a conference room for the officer meetings; Grand Council, Foundation and Endowment-Loan Board often met there.

Randall Stevens Guerra (Gamma Eta) was appointed by Grand Council to assume the position of Executive Secretary-Treasurer in August, 1980 and served until August, 1982. During her term more volunteer functions were brought into the office to relieve some of the daily clerical tasks that Grand Council members were performing from their homes. This was in recognition of the changing role of women in volunteer organizations. More and more Gamma Phi Beta officers worked outside of the home and no longer had the luxury of devoting full time hours to a volunteer position. This move freed Council to spend more time to do long range planning, formulating policies and programs and providing leadership training for international officers. During her tenure, Mrs. Guerra had a baby boy, who spent a few weeks sharing the Executive Secretary-Treasurer's office. She then went on to serve as International President from 1986-90.

During this period of time, there was a growing amount of discussion about the need to build equity in property of our own which would serve as our Central Office. Research showed that Gamma Phi Beta was one of the few National Panhellenic Conference groups that did not own a headquarters. Years of paying lease fees and the wish to own something in the name of the Sorority kept this talk.

Marjory Mills Shupert (Tau) became Executive Secretary-Treasurer in the summer of 1982. She continued the trend of assuming more of the routine tasks done by volunteers while increasing the staff to perform these duties. Mrs. Shupert brought a unique and comprehensive view of Central Office functions to the job, as she had previously served as Alumnae Coordinator for a number of years.

An increasing concern on the part of the leaders of Gamma Phi Beta at this time was the preservation of archival material. Microfilming records which were stored off site began, as well as thought given to the day when an archives would be a reality. In October of 1984, Mrs. Shupert supervised the Central Office relocation to 7395 E. Orchard Road, Suite 200, Englewood, Colorado. She provided efficient office managerial skills to effectively collect and disperse information for the benefit of chapters, alumnae and international officers, utilizing electric, self-correcting typewriters, an IBM PCXT computer and a copy machine averaging 26,000 copies per month. Microfilming of Gamma Phi Beta documents began at this location. 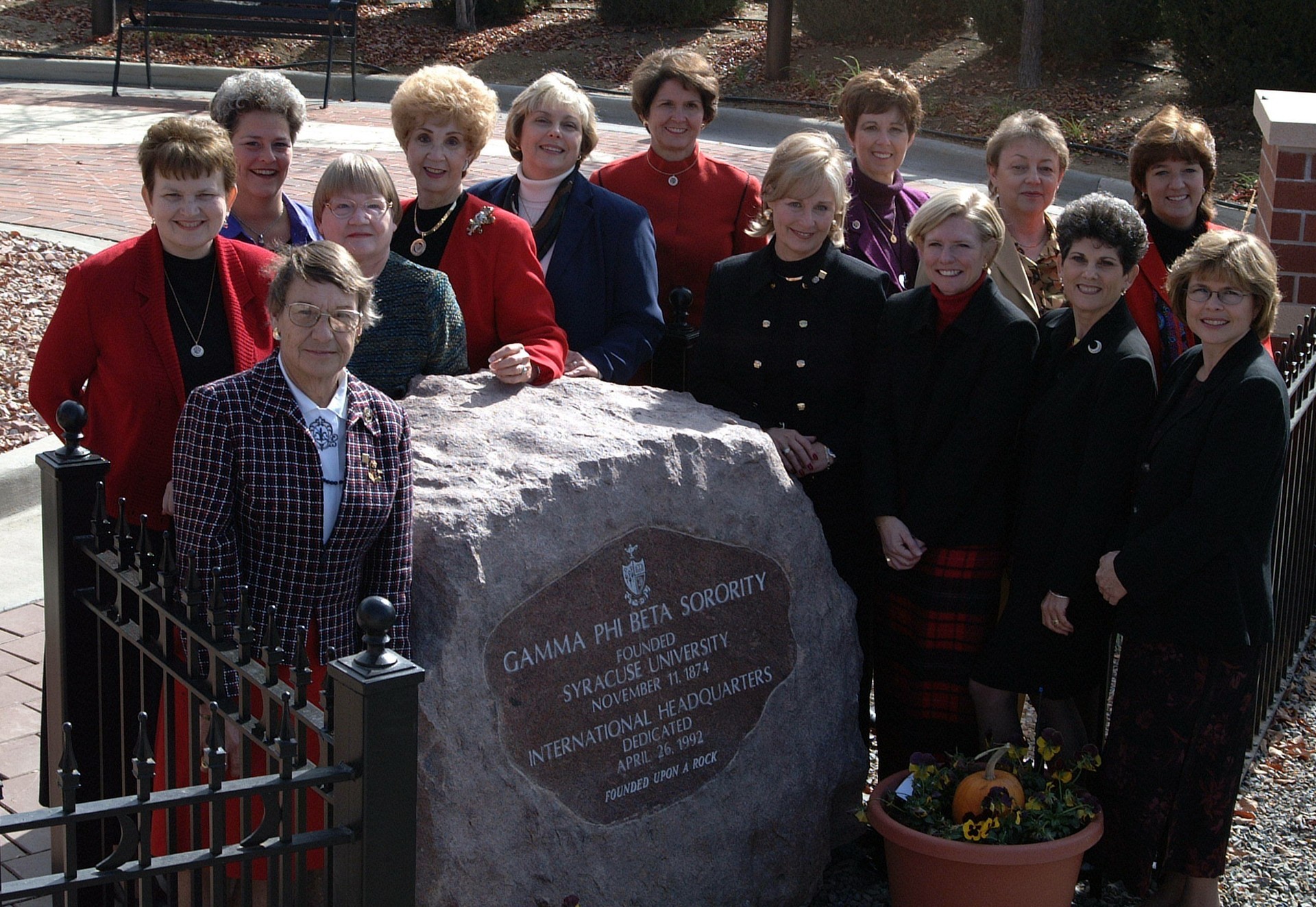 A Capital Endowment Campaign (CEC) was created by the joint efforts of the combined governing boards; Grand Council, Endowment-Loan Board and Foundation Board of Trustees, with the overwhelming support of the 1988Convention body. The CEC was established to permanently endow Gamma Phi Beta's leadership programs, thus releasing funds to purchase an International Headquarters. Gamma Phi Beta members raised over $820,000 for the CEC.

A ground breaking ceremony, complete with a brass band, for the new International Headquarters at 12737 E. Euclid Drive, Englewood, Colorado, was held during the Denver Convention, July 28, 1990. Gamma Phi Beta Sorority enthusiastically moved into permanent International Headquarters in October, 1991. It is built on three acres and offers executive and administrative offices, board and conference rooms, living and suite areas, a kitchen and a gallery/ archival display of antique badges, photographs and Sorority memorabilia.

Under the supervision of Marjory Mills Shupert, Executive Director, International Headquarters has evolved into an efficient support system enabling Gamma Phi Beta women to serve their Sorority. The

Gamma Phi Beta leaders provide educational and leadership services to enable each Gamma Phi Beta to develop to the highest type of womanhood. Communication from International Council was extended via the staff of 15 utilizing personal computers, facsimile machine, postage meter and a copier averaging 50,000 to 65,000 copies monthly to 110 Greek-letter chapters and 145 alumnae chapters totaling 107,526 members in 1992.

Gamma Phi Beta's International Headquarters is a beautiful reflection of the love and dedication inspired by the Four Founders of our beloved Gamma Phi Beta.