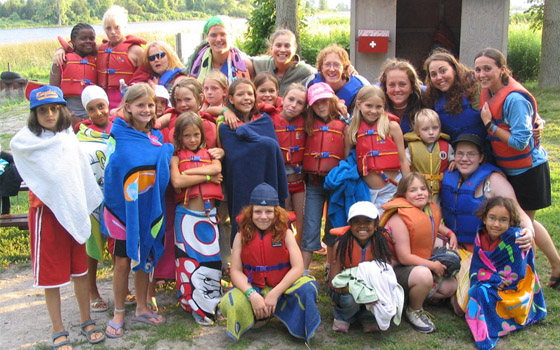 Members and campers at Camp Trillium, 2006.

Gamma Phi Beta had been focusing its philanthropic efforts on camping since 1929 as a way to bolster underprivileged girls. Now, the task force was looking for a way to continue its focus on camping by finding an organization that offered opportunities for involvement at the local level. Camp Fire USA – today known simply as Camp Fire – originally organized in 1910 as Campfire Girls of America, a sister organization to Boy Scouts of America, fit the bill perfectly. The task force’s recommendation to enter into collaboration with Camp Fire USA was voted on and approved at Convention 2002. Gamma Phi Beta was to provide volunteers, mentors and financial resources. Living up to the ideals they expound, Gamma Phi Betas generously raised more than $60,000 for the Foundation during the 2002 Convention, and within a month after the collaboration was approved, Gamma Phi Beta Foundation donated $10,000 to send 40 girls to camp before the end of the summer.

Camp Sechelt in Vancouver, British Columbia, had been inactive since 2001 and was about to be put on the market for sale. As part of the proposal that included an annual gift for camp scholarships, the proceeds from the sale of Camp Sechelt were to be divided between the Gamma Phi Beta Foundation and the Vancouver Camp Board.